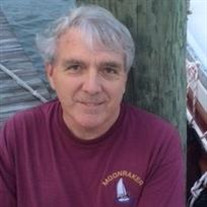 William O. Shuman Jr., 66, a resident of Annapolis, MD, died from cancer on Friday February, 12, 2016 surrounded by his family. He was born August 29, 1949 in Chicago, IL, raised in Philadelphia, PA, and later moved to Annapolis to pursue his lifelong love of sailing. He is survived by his devoted and loving wife of 41 years, Donna Shuman, his children Benjamin Shuman, Ian Shuman, and Amy Banta; his seven grandchildren Aaron L. Shuman, Emilia J. Shuman, Samuel A. Shuman, Armando J. Martinez Blanco, Diego F. Martinez Blanco, Quinn M. Banta, and Cooper D. Banta; his siblings Guy Shuman, Adam Shuman, and Leslie Long. He is preceded in death by his parents William O. Shuman Sr. and Joan Long. Bill was an active member of the community. He was the president of the Hillsmere Shores Improvement Association for 10 years, and spent many years as the president of both an astronomy club in Philadelphia and of an outdoor adventure club in Annapolis. His varied careers included an enlistment in the U.S. Coast Guard, an officer in the Philadelphia Police Department, a junior high school science teacher, and a Software Developer. Bill always took great pride in being an involved father, grandfather, and uncle. He spent his free time as an amateur astronomer, an avid caver, and a cruising sailor. He was able to achieve his life’s dream and became a full time cruising sailor four years ago. He and his wife Donna spent two years sailing the eastern seaboard as well as the Caribbean and the Bahamas. A gathering will be held on Saturday, February 27 at Lasting Tributes Cremation & Funeral Care, 814 Bestgate Road, Annapolis, 21401 at 1:00 pm with a Time of Shared Memories beginning at 2:00 pm. Food and fellowship will continue at Lasting Tributes until 4:00 pm.

William O. Shuman Jr., 66, a resident of Annapolis, MD, died from cancer on Friday February, 12, 2016 surrounded by his family. He was born August 29, 1949 in Chicago, IL, raised in Philadelphia, PA, and later moved to Annapolis to pursue his... View Obituary & Service Information

The family of William "Bill" Shuman Jr. created this Life Tributes page to make it easy to share your memories.

Send flowers to the Shuman family.