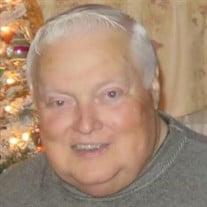 William P. Drury (Bill), loving husband, father, grandfather, and great grandfather passed away on Tuesday, June 14, 2022, at the age of 83. Bill was born August 25, 1938, to Paul and Martha Drury in Canton, Ohio. Bill married Suzanne (Sue) Zastudil 61 years ago on January 28, 1961. Together they raised three sons and resided in Canton, Ohio and DeWitt, MI before moving to Maryland in 1983. Bill was raised in Jackson Township, Ohio. He attended Jackson High School where he played football. In his senior year the team was undefeated and won the class A championship. He graduated in 1956. He attended Akron University and Walsh College. Bill spent many years in food service management and supervision for McDonald’s and Red Lobster. After moving to Maryland, he was employed by the National Security Agency as a federal police officer at Fort Meade until he retired after 24 years of service. Bill had a pleasant personality and was happiest surrounded by family and friends. His favorite pastimes were watching OHIO State football games, boating, cruises, skiing, and WV trips with friends. He has always been extremely proud his sons and their achievements. Bill was preceded in death by his parents and his younger sister, Patricia Buck. Bill is survived by his devoted wife, Sue, his son, William P. Drury Jr. of DeWitt, MI, son, Douglas W. Drury, (Deborah) of Odenton MD and son Bradley D. Drury (Monique) of Grawn, MI, a younger brother, Dennis Drury (Mary) North Canton OH. He is also survived by eight grandchildren and two great-grandchildren. His family requests that anyone who knew and loved him to join them for a visitation at Lasting Tributes, 814 Bestgate Rd., Annapolis, MD 21401 on Saturday, June 18th from 1-4 pm. Bill's family invites all to attend his funeral service on Friday, June 24, 2022 at Church of the Lakes, 5944 Fulton Dr. NW, Canton, OH. Guests may arrive at 10 am for a visitation with his service to begin at 11 am. Burial will follow at Sunset Hills Memory Gardens, 5001 Everhard Rd NW, Canton, OH. In lieu of flowers, donations may be made to American Diabetes Assoc. or Alzheimer’s Assoc.

The family of William "Bill" Drury, Sr. created this Life Tributes page to make it easy to share your memories.