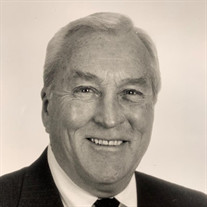 William C Cusack, Jr. died of COVID Pneumonia on February 1st, 2021 in Annapolis, Maryland. He was 92. Born in Boston, MA, January 7, 1929, Mr. Cusack was raised in Winchester, MA, and graduated from Choate School, Wallingford, CT. He received a BA in Economics from Hobart College where he was a member of the Kappa Sigma Fraternity, and played varsity football and lacrosse. He was named MVP as selected by the Hobart football squad in 1950. Mr. Cusack served in the Air Force from June 1951 to June 1955. With an AEC “Q” Clearance, he worked as an A-Bomb assemblyman. His business career was as a professional salesman, the last twenty-eight years of which was spent as a Mutual Fund Wholesaler. He held a Certified Financial Planner (CFP) designation and served on the National Board of Directors on the International Association for Financial Planning from 1975-1977. Bill loved skiing and was on the National Ski Patrol in the Sierras, Rockies, and New England Ski Resorts for many years of his life. He also played ice hockey until he turned 49. He was an avid sailor and racer. He starting racing Snipes as a youth back in the 30’s. Bill, better known as “Sparky”, was a long time member of the Eastport Yacht Club having been a member since 1983. Sparky was beloved by many at EYC and valued for his leadership on Race Committee. Surviving are his sons Timothy D. Cusack, Crownsville, MD, Jeffrey P. Cusack, Tiburon, CA, Robert W. Cusack, Gaithersburg, MD, two grandsons and four granddaughters. Also, his brother James C Cusack, Cape Elizabeth, ME. Preceded in death by his wife of thirty years, Joan A. Cusack. Mr. Cusack will be laid to rest at Lakemont Memorial Gardens, Davidsonville, MD. Memorial contributions may be made to the American Cancer Society.

The family of William C. Cusack, Jr. created this Life Tributes page to make it easy to share your memories.

Send flowers to the Cusack, family.