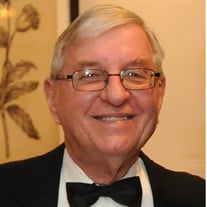 William John Boehmler, age 82, died peacefully at the home of his daughter Gretchen and son-in-law Bryan in Chesapeake Beach, MD on July 1st. Bill was the third of three children of German immigrants, John and Katherine Boehmler, of Margate, NJ. His oldest sister, Hilde, was a teacher and owner of the family’s restaurant after their parents. Bill’s twin sister, Betty, was born in a Philadelphia hospital just minutes before his arrival, and had a distinguished career in nursing in Los Angeles where she rose to the position of Director of Nursing. Bill earned a Biology degree at Swarthmore College, and his medical degree at the University of Pennsylvania on a US Navy ROTC scholarship. He served his ROTC commitment as a Navy officer in Japan during Viet Nam. He returned to the States in 1968 to begin his career as a general physician with the Lansdale Medical Group in Lansdale, PA. In 1976, Bill completed another residency in psychiatry and began practicing his new specialty in Lansdale. Ten years later, he moved to Reading, PA to serve on the psychiatric staffs of Reading Hospital and St. Joseph Medical Center of Reading. He founded Berkshire Psychiatric & Behavioral Health Services in 1994, where he practiced until his retirement in 2015. Bill met his first wife, Elizabeth Ann Csink, when she waitressed at his family’s restaurant. They raised seven children in Lansdale, PA, and all of them graduated from college, fulfilling Bill’s heartfelt wish. He was proud of his children’s careers and delighted in their families and his 16 grandchildren. Bill married his second wife, Margaret, in Reading, who had three children and two grandchildren at the time of her death in 2015, and two more grandchildren since then. He moved to Annapolis, MD to be closer to his family after his wife’s passing. There, he enjoyed lots of his favorite seafood, minor league baseball with the Bowie Baysox, volunteering at the library, community college history courses, and visits with family and friends. Bill is predeceased by his wife Margaret, his sisters Hilde Dimond and Betty Boehmler, and his daughter Charlotte Ann Kampia. Bill is survived by six children, their spouses, and 16 grandchildren in Pennsylvania and Maryland: John and Kim Boehmler, Claire and Ron Zarrilli, Gretchen and Bryan Rager, Adam Kampia (husband to Charlotte), Albert and Cheryl Boehmler, Paul and Kelly Boehmler, and Kate and Kyte Hoefert. He also says a loving goodbye to Margaret’s children and grandchildren, Joe and Sonja Minot and Marianne Strunk, and his beloved nieces and nephew and their families. In lieu of flowers, please consider a donation to one of the following charities in Bill’s memory. Please be sure to check the box for a tribute or “in memory of,” or select the additional information field, and type in William J. Boehmler - we would like to acknowledge your remembrance. Addresses for mailing donations can also be found on these websites - please note Bill’s name on the memo field of your check. Brain and Behavior Research Foundation: https://donate.bbrfoundation.org/civicrm/contribute/transact?reset=1&id=1 The Gettysburg Foundation: https://cart.gettysburgfoundation.org/donate/contribute1 National World War II Museum: https://secure3.convio.net/nw2m/site/Donation2;jsessionid=00000000.app30122b?idb=44504856&df_id=8056&mfc_pref=T&8056.donation=form1&NONCE_TOKEN=79CA2BDDC8B8F3C89F16B2FD6BBEF80F&8056_donation=form1 Wounded Warrior Project: https://support.woundedwarriorproject.org/default.aspx?tsid=11585&ovr_acv_id=6794&campaignSource=ONLINE&source=BS20001&gclid=Cj0KCQjwl4v4BRDaARIsAFjATPmphEC_MZMudaN3TFUp63Dzccsjg5PgNxSfL69lx7rQlqggsKxy0kEaAmYCEALw_wcB

William John Boehmler, age 82, died peacefully at the home of his daughter Gretchen and son-in-law Bryan in Chesapeake Beach, MD on July 1st. Bill was the third of three children of German immigrants, John and Katherine Boehmler, of Margate,... View Obituary & Service Information

The family of William John Boehmler created this Life Tributes page to make it easy to share your memories.

William John Boehmler, age 82, died peacefully at the home of...

Send flowers to the Boehmler family.