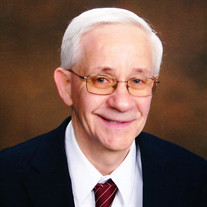 Following a brief illness, Dr. Wayne Morris Hurr, 73, of Annapolis MD, passed away peacefully on Sunday, September 5, 2021, at Anne Arundel Medical Center. Wayne grew up on the family’s 100-acre farm in Jersey Shore, Pennsylvania. He was the youngest son of the late Clarence “Bud” Hurr and Martha Case Hurr. His twin brother, Allan, was older by 10 minutes and never let Wayne forget it. Wayne is survived by his wife, Barbara “BJ” Hurr; his brother, Allan Hurr; his sister, Marilyn Rayhorn; and his sister-in-law, Connie Bone. He was preceded in death by his sister, Ernestine “Tina” C. Borton; his brother, Lawrence “Larry” Hurr; and his brother-in-law, Keith Rayhorn. After graduating from Lycoming College, Wayne received his master’s degree from Wake Forest University and his Ph.D. in Counseling Psychology from Duke University. He began his professional career in community mental health services. In 1987 Wayne became Director of the Counseling and Psychological Service Center at The College of Saint Rose in Albany NY. Wayne joined the Counseling and Psychiatric Service at Georgetown University as a Staff Psychologist and Sport Psychology Consultant in 1992. During his 22-year career at Georgetown, he specialized in crisis intervention, psychotherapy, test anxiety, stress management and clinical supervision of interns. As a consultant to Georgetown coaches and teams, Wayne’s lifelong interest in sports and working with athletes merged. He focused on a wide variety of sports including Lacrosse, Sailing, Track and Field, Soccer and Rowing. A key participant in the Athletic Department’s “safety net”, he was a recipient of a Georgetown Outstanding Contribution to Athletics Award in 2001. In addition, Wayne was a Certified Consultant for the Association for the Advancement of Applied Sport Psychology. He was on the United States Olympic Committee Sports Psychology Registry and served as a Sport Psychology Consultant to USA Track and Field and USA Gymnastics. Wayne also provided sports psychology services for Olympic athletes at the 2000 Olympic Games in Sydney, Australia. In 1970 Wayne married his high school sweetheart, Barbara Joyce “BJ” Bone. After living in various locations in North Carolina, Delaware, Pennsylvania, New York, and Maryland, they settled in Annapolis in 1996. In his free time, Wayne enjoyed sports and travel, but he valued time spent with family and close friends above all. A compassionate, generous, and gentle man, Wayne’s was a life well lived. He will be sorely missed. A private service will be held. In lieu of flowers, memorial contributions may be made to the Mr. and Mrs. Ernest M. Case Endowed Memorial Scholarship at Lycoming College, Office of College Advancement, One College Place, Williamsport PA 17701.

The family of Wayne Morris Hurr created this Life Tributes page to make it easy to share your memories.

Send flowers to the Hurr family.