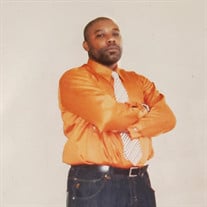 Wardell Wesley Johnson Jr. also known as “W”, departed this life on February 3, 2021 at Johns Hopkins Hospital, in Baltimore, Maryland, after nearly a year long battle with Leukemia. W was born December 30, 1977 to Wardell Johnson Sr. and Theresa Thomas in Annapolis, Maryland. He was preceded in death by his grandparents: Louis Johnson Sr., Racheal Johnson, Betty Colbert and James Thomas, one aunt, Doris Boyd, and two uncles, Gregory Boston Sr. and Louis Johnson Jr. W received his education through Anne Arundel County Public Schools. His interest in the automobile industry led him to becoming a Class A CDL driver and starting his own trucking business, CSA Transport LLC. Until the time of his illness, he was employed as an independent contractor for Napa Auto Parts. W was an outspoken, down to earth guy who loved his family unconditionally. The bond they shared was impeccable; being together, laughing, and telling jokes was a must. He was famous for playing on the phone. His love for his parents was remarkable, its nothing he wouldn’t do to keep them happy. He protected and loved his children whole heartedly, spending time together brought them so much joy. He always had an open ear and gave honest advice, when needed. W was a phenomenal big brother and father figure to his sisters; if he had it, they had it. The love he had for his first and only grandchild, Milo was beautiful, he would spend hours caring and spoiling him. W’s love for food was astounding, but his absolute favorite was lasagna. He loved watching sports. The Pittsburg Steelers was his favorite team; he celebrated when they won, but would get extra excited when they beat the Baltimore Ravens. He was a man that had many hobbies; his favorite was buying, fixing, and selling cars. W loved life and lived life to the fullest, so whether you called him Wardell, W, Daddy or Johnson, remember all the wonderful memories you shared, because he’s forever in our hearts. W leaves to cherish his memory, his loving and devoted parents: Theresa Thomas and Wardell Johnson Sr., his five devoted children: Shatia “Scoot” Johnson, Alayshia “Lazy” Johnson, Charia “Little Mommie” Johnson, Charnia “Nia” Johnson and Cayden Johnson, one grandchild: Milo “Lolo” Johnson, two very loyal and caring sisters: Chekesha “Piggy” Smith (Maurice) and Ashlin “Ash” Price, one brother: Malik Crawford, five uncles: Augustus (Sarah) McGowan, Clayton (Chris) Thomas, Ernest Davis, Wade and Lester Johnson (Kim), six aunts: Terry Watkins (Louis), Constance Forrester (Richard), Marsha Thomas, Alice James, Pamela Davis (Lonnie), Hope Flyth (Glen) and a host of relatives and devoted friends.

The family of Wardell "W" Wesley Johnson Jr. created this Life Tributes page to make it easy to share your memories.

Send flowers to the Johnson family.