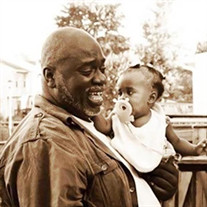 Vincent Leon Alexander (58), affectionately known as “Googie”, left us suddenly on October 24, 2019, with his family by his side at University of Maryland Hospital. Vincent was born November 17, 1960, from the union of his parents the late Thelma Jean Boston Alexander and Ule Leon Alexander, Sr. Vincent received his formal education from the Anne Arundel County Public School System. After graduation, he enlisted in the United States Army Reserve. Upon his completion in the Army, he began his love of cooking and driving long distances for various trucking companies. Vincent went through many trials and tribulations which led him to accept Christ as his personal savior. He attend varies churches in Baltimore and Annapolis area. He believed church was not in a building but within your heart. He was a true example of “Love thy Neighbor”. If you needed someone to drive you anywhere, he would be your driver. If you got lost, he was the one who could give you directions to get you home. His interests included family, cars and sports. His favorite sports teams were the New York Giants and Baltimore Orioles. His “bestie” was his niece Brandi. She became his ride or die. He was her cook and childcare provider all while being her uncle in disguise. His greatest joy was being there for his nephew, great niece and great nephew. He talked a tough game, but they all had him wrapped around his fingers. He would fuss and then do whatever they needed him to do. He was our huggable bear with the biggest smile you could see. He leaves to cherish his memory his spouse- Betty Alexander (PA); father- Ule , Sr; two sisters- Tina Proctor (Patrick) and Gail Saunders (Nichol); two brothers -Calvin and Ule , Jr aka JR; niece- Brandi; nephew-Dominic, great niece- Malayah, great nephew-Maddex ; Aunts- Henrietta Joyce (Millersville), Gertrude Colbert (Tennessee), Shirley Alexander (Annapolis), Gladys Alexander (Annapolis) and Denise Alexander ( Glen Burnie); Uncles- Theodore Boston (Pasadena), Timothy Boston (Glen Burnie), Franklin Alexander (Annapolis) and Dean Alexander (Baltimore) his two best sidekicks Curtis Dupre aka (Hookfin) and Charles Dillard (Chuckie) and two very special lady friends -Emily Canty (aka Saturday Bonnie) and Zorita Grimes (Marnie) along with a host of cousins and a host of cousins and other loving relatives and friends. In lieu of flowers, donations can be made to our little brother, Ule Leon Alexander, Jr to help with his cancer expense.

Vincent Leon Alexander (58), affectionately known as &#8220;Googie&#8221;, left us suddenly on October 24, 2019, with his family by his side at University of Maryland Hospital. Vincent was born November 17, 1960, from the union of his parents... View Obituary & Service Information

The family of Vincent Leon Alexander created this Life Tributes page to make it easy to share your memories.

Send flowers to the Alexander family.