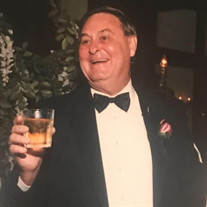 Surrounded by his family and holding the hands of his three daughters, Thomas Edward Riggin of Glen Burnie passed away on Sunday, January 6th at the age of 87. Known and loved by many, Tom was always one to give and help others who needed it most. He was nicknamed, Wimp, based on the character from Popeye. He attended Southern High School in Baltimore before joining the Marines and fought in the Korean War where he earned a Purple Heart for his service. Upon his return home, he put himself through school at Western Maryland College (now McDaniel) playing football and basketball throughout. He remained a fan of sports throughout his life. Tom went on to have a long career as the International Sales Manager for Baker and Taylor, a worldwide book retailer, retiring at the age of 75. This profession led him to travel the world and he relished the times he brought his family to see things he only imagined growing up in South Baltimore. With his love of books, Tom became an avid collector of rare and antique books and coins and continued to enjoy this hobby throughout his retirement and into his final days. A true animal lover, Tom adored his pet cats and fed birds, squirrels, raccoons, and possums on his deck every day. Always one to give back, Tom was a charter member of the Take Back Our Streets program, developing after school activities for kids in troubled neighborhoods. He took great pride in helping those in need and even greater pride in making a difference in the lives of others. In addition to his career at Baker and Taylor, Tom had a love of politics, running numerous political campaigns and doling out advise to those interested in running for office. He went onto become a long-serving Chairman of the Anne Arundel County Liquor Board. He is survived by his daughters, Wendy Killian (John) of Pasadena, Kristin Fleckenstein (Tom) of Pasadena and Laura Reddish (Rod) of Arnold, nine grandchildren, Brittany, Corinne, Brendan, Angelina, Lucy, Charlotte, Max, Lily and Chase and two great-grandchildren, Jillian and Christopher. He remained close with his former wife, Barbara, throughout his life. He is also survived by his brother, Joseph Riggin, sister, Mildred (Midge) Scheydt, and dozens of nieces and nephews. Family will receive visitors at the Lasting Tributes Funeral Home on Bestgate Road in Annapolis from 3 to 7 on Thursday, January 10th. The funeral and celebration of his life will be held at Lasting Tributes on Saturday, January 12th at 11 AM. In lieu of flowers, donations may be made to Hospice of the Chesapeake, 90 Ritchie Hwy, Pasadena MD 21122.

Surrounded by his family and holding the hands of his three daughters, Thomas Edward Riggin of Glen Burnie passed away on Sunday, January 6th at the age of 87. Known and loved by many, Tom was always one to give and help others who needed it... View Obituary & Service Information

The family of Thomas Edward Riggin created this Life Tributes page to make it easy to share your memories.

Surrounded by his family and holding the hands of his three daughters,...

Send flowers to the Riggin family.