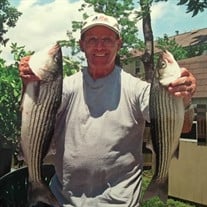 Thomas Byron Miller was born July 20, 1943 in Takoma Park, Maryland to James Albert Miller and Gertrude Ethel Byron Miller. He was the third of their four children. He lost all three of his siblings in 2007. He attended St. Anthony’s School in Washington, D.C., eventually graduating from Bladensburg High School. He first met his wife, Margaret Lorraine Shaw as a child during the summers spent at his family’s cottage on the shores of the Herring Bay. He and his brother, Steve used to stash their life jackets in the storm drain in front of her house. Her dog would bark at them, so they would throw rocks at it and she in turn threw rocks at them. Picking up their relationship as teens they married on April 27, 1963. He won numerous trophies driving a Volkswagen he customized for drag racing at Aquasco and Capital Raceway. He was drafted into the Army on his birthday in 1966 and served on Okinawa for eighteen months during the Vietnam War. Upon returning home he met his thirteen-month-old son for the first time. He began his automotive career with Jay Chevrolet in Upper Marlboro and then became an apprentice mechanic with a Volkswagen dealer in D.C. He held several positions from mechanic, to shop foreman and then service manager at various dealers in Washington, D.C. and throughout Maryland. He resided with his family in Riverdale, Maryland for seven years before moving to Davidsonville, Maryland in 1975. When his mother-in-law, Ida Shaw who suffered from Alzheimer’s became a widow, he and his wife cared for her in their home for seven years making sure her golden years were spent in the utmost comfort. In 2015, they moved to Centreville, Maryland. He always provided for his family and taught each of his children the importance of having a strong work ethic. He cherished time spent with his grandchildren and great grandchildren. He and his wife provided loving daycare for his two youngest great grandsons, with whom he was especially close. He was an avid waterman and spent many years boating with friends. He enjoyed salt water fishing on the Atlantic Ocean and the Chesapeake Bay, cultivating tomatoes in his backyard and wrangling squirrels. He amassed a collection of rods and reels that he proudly displayed in his home and would share fish tales of his days on the water with any guest who visited. In addition to his devoted wife of almost fifty-six years he is survived by his three children, Thomas Byron Miller, II (Chip), Karen Leigh Morgan and Amanda Mae Miller, five grandchildren, Kimberly Nicole Miller, Matthew Jacob Miller, Taylor Danielle Leigh, Samantha Mae Fisher and Morgan Briana Leigh, and three great grandsons, Bryce Estep, Joseph Bischoff and Thomas Bischoff. Also surviving are his brother Steve’s children, Anissa Hastings and Brian Miller, with whom he shared a special relationship. A memorial gathering will be held on Friday, March 29th from 6 to 8 p.m. at Lasting Tributes, 814 Bestgate Road, Annapolis, MD 21401. In lieu of flowers donations made be made to The American Heart Association, Lung Cancer Association or the American Cancer Society.

Thomas Byron Miller was born July 20, 1943 in Takoma Park, Maryland to James Albert Miller and Gertrude Ethel Byron Miller. He was the third of their four children. He lost all three of his siblings in 2007. He attended St. Anthony&#8217;s School... View Obituary & Service Information

The family of Thomas Byron Miller created this Life Tributes page to make it easy to share your memories.