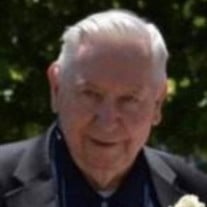 Thomas Joseph Donahue "Tom", 86, a 62-year resident of Annapolis, MD and previously of Nanticoke, PA, died on January 17 after a brief illness. Born on January 24, 1934, in Nanticoke, PA to the late Joseph and Helen Donahue. He received his BA in Education, from Kings College in 1959 and a MA from Towson State University in 1971. He served honorably in the U.S. Navy as an airman during the Korean War, from 1951-1954. Tom had a lengthy career in Anne Arundel County Public Schools, as an educator. He began his career as a history teacher and later worked as a Pupil Personnel Worker. He retired from Anne Arundel Public Schools in 1994. He was an usher and Arimethean with St. Mary’s and St. John Neumann Catholic Churches. He was a member of the Fleet Reserve Club branch 24, the American Legion Post 7 and Elks Lodge 622 all of Annapolis, MD. Tom enjoyed, cars, music, movies, dancing, sports, especially Notre Dame and Ravens football as well as eating crabs, oysters and fish, celebrating St. Patrick’s Day, going to Cantler’s Riverside Inn every Christmas Eve, spending time with his family and friends "telling stories" (we never knew truth from fiction). He was also our family handy man training us how to fix things and of course save money! Tom is survived by his son, Tommy (Lisa) Donahue of Mechanicsville, MD; his daughter, Colleen (Eric) Cantler of Annapolis, MD; his grandchildren, Amanda (Robert), Zachary, Marisa, great grandchildren Madelyn, Dominic, Kiersten, Trey, and all his extended family around the country. He was preceded in death by his wife of 45 years, Rosalie, brother Joseph Donahue, sisters Marie Brislin and Francis Bodek. A visitation will be held on Tom's birthday, Sunday, January 24, 2021 at Lasting Tributes Cremation & Funeral Care, 814 Bestgate Road, Annapolis MD 21401 from 2-4 pm and 6-8 pm. A funeral mass will be held on Monday, January 25, 2021 beginning at 9:00 am, at St. John Neumann, 620 N. Bestgate Road, Annapolis, MD 21401 with burial to follow at Crownsville Veterans' Cemetery. Due to Covid19, burial services will be private to the public but will be posted on his Tribute page on the funeral home website.

Thomas Joseph Donahue "Tom", 86, a 62-year resident of Annapolis, MD and previously of Nanticoke, PA, died on January 17 after a brief illness. Born on January 24, 1934, in Nanticoke, PA to the late Joseph and Helen Donahue. He received his... View Obituary & Service Information

The family of Thomas Joseph Donahue created this Life Tributes page to make it easy to share your memories.

Send flowers to the Donahue family.