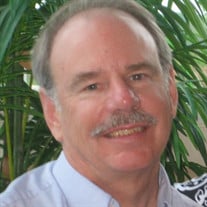 Thomas Carlyle Carrico, Jr. of Arnold, Maryland died on July 12, 2020 at University of Maryland Medical Center in Baltimore after an 11 year battle with cancer. He was the son of Beulah S. and Thomas C. Carrico, Sr., who predeceased him. Tom is survived by his wife/companion of 36 years, Debbie Carrico, stepson Eric Crapster, and his brother Joseph E. Carrico and their extended families. Tom was born and raised in La Plata, Maryland and graduated from Western Maryland College (McDaniel College) in 1973. Shortly after graduating, Tom embarked on a 34 year career with the State of Maryland as an IT Programmer with The MVA and the Comptroller of Maryland. He settled in the Anne Arundel County area and began his life journey into sailing. His spare time was devoted to sailing and racing in and around the Chesapeake Bay and its surrounding tributaries. In 1984 Tom met the love of his life, Debbie and she climbed on board as crewmate and life-long companion. Over the years they joined forces in numerous races and regattas on a variety of boats. Trepidation, Airmail and most recently Flight were the vessels which served them well in races and travels. His adventures also included ocean races from Annapolis to both Bermuda and Newport. His sailing exploits earned him many awards and prizes along the way. Primarily it provided him the opportunity to be on the water which he always enjoyed. His early love of boating started when he was a part-time weekend Maryland Marine Police member in Southern Maryland during summer breaks. By being a participant in the sailing community, Tom and Debbie gathered crew members, friends and acquaintances and earned the respect of those he came in contact with for his calm and steady demeanor and his ability to adapt and adjust when faced with obstacles presented by his boat, crew or conditions. He has been described as "the gentlest, quietist, and most even-tempered skipper". In 2007 Tom and Debbie both retired from the state of Maryland, and purchased a 4 wheel drive van with the intent to travel throughout North America. An initial adventure through Alaska and back was followed by treks to all the National Parks including Yellowstone and the Grand Canyon. They also explored the Northeast coast line to Nova Scotia, Prince Edward Island and back. In recent years, they spent winter months in Florida traveling in their camper and then eventually sailing their boat to Florida as their winter home. Less than two years after retirement Tom faced a battle with cancer. After surgery, chemo and radiation he recovered and continued to travel around the country and sail. Cancer reappeared in 2018, resulting in another surgery and more radiation. While persevering and trying to continue in his adventurous ways, he never completely recovered, and finally succumbed on July 12, 2020 following a difficult two month struggle. Memorial donations can be made in Tom's memory to Chesapeake Region Accessible Boating (https://crabsailing.org/) A celebration of life for Tom will be held at a later date, when the COVID restrictions allow a celebratory gathering.

Thomas Carlyle Carrico, Jr. of Arnold, Maryland died on July 12, 2020 at University of Maryland Medical Center in Baltimore after an 11 year battle with cancer. He was the son of Beulah S. and Thomas C. Carrico, Sr., who predeceased him. Tom... View Obituary & Service Information

The family of Thomas Carlyle Carrico Jr. created this Life Tributes page to make it easy to share your memories.

Send flowers to the Carrico family.