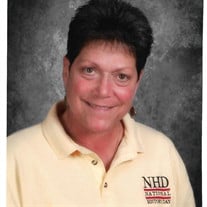 Susan Ann Hottle-Schultz, a resident of Annapolis, MD, since 1989, died on June 1 after several courageous bouts against debilitating illness. She is survived by her husband, Frederick L. Schultz (to whom she had been married for 42 years), mother Lois A. Hottle, of Gettysburg, PA, and brother Charles Hottle, of McMinnville, OR, as well as niece Rachel Hottle, of Montreal, Quebec, nephew Nicholas Hottle, also of McMinnville, OR, and aunts Sister Jean Holtz, SSJ, of Flourtown, PA, Carol Holtz, of Gettysburg, and Barbara Collingsworth, of Shippensburg, PA. She is also survived by a large number of cousins and other relatives in New Jersey and Pennsylvania. She was predeceased by her father, Robert E. Hottle, and a sister, Donna Marie. Ms. Hottle-Schultz was a 1975 graduate of Spring Grove High School, PA. She received Bachelor of Arts and Master of Liberal Arts degrees from Western Maryland College (now McDaniel College) in Westminster, MD, and wrote her Master’s thesis on former First Lady Mamie Eisenhower, including interviews with her son, John, and granddaughter, Susan. After having served in President Jimmy Carter’s Young Adult Conservation Corps in 1978, she was later a U.S. National Park Service Ranger at Gettysburg, where she led visitors through the Eisenhower home, including a special “Cook’s Tour” of the president’s kitchen (including recipes) and barbeque pit, for which he was well known. She also spent a spring and summer attending to the Eisenhower vegetable garden, to historical specifications, with her husband, along with fellow Ranger Stanley Lawhead and wife Coinda. Ranger Hottle-Schultz also served in 1988 during the 125th anniversary of the Battle of Gettysburg, assisting with the program at the Eternal Light Peace Memorial, highlighted by a nationally reported address by scientist, author, and featured speaker Carl Sagan. Ms. Hottle-Schultz moved to Annapolis, MD, the following year with her husband and started a long career in education at St. Mary’s schools. She first served as an elementary teacher, then taught in the middle school, and ended her distinguished service to hundreds of young people, teaching Maryland History, Advanced Placement Geography, and Social Studies at St. Mary’s High School. In 2010, Ms. Hottle-Schultz was named the Maryland State History Teacher of the Year and represented the state at National History Day, celebrated that year by U.S. educators from across the country at the University of Maryland. For that achievement, she was honored with special citations from the Maryland legislature on the floors of both the Senate and the House of Delegates. Around this time, Ms. Hottle-Schultz led her advanced class to the set of NBC’s “Meet the Press” in Washington, where they had been invited and were welcomed by long-time program host, the late Tim Russert. She was also a member of the National Council for History Education and the National Council for the Social Studies, attending the annual conferences of both each year. Ms. Hottle-Schultz was a devoted dog-lover and participated in canine obedience competitions across the region. She was also a master chef and enjoyed live music—from classic roots and bluegrass to various versions of rock-and-roll. And she relished frequent trips with her husband to a house in the hills near Berkeley Springs, West Virginia, along with trips to the Delaware beaches and the Outer Banks of North Carolina. The couple very much liked cool New England summers and took what became annual excursions to Bar Harbor and Acadia National Park, ME. One year, they added an adventure on board the CAT, the high-speed catamaran ferry from Bar Harbor to Yarmouth, Nova Scotia. They stayed near picturesque Lunenburg and from there toured much of the province. A mass in honor and remembrance of Ms. Hottle-Schultz will be held at St. John Neumann Catholic Church in Annapolis, celebrated by her cousin, Rev. Albert T. Holtz, O.S.B., Newark Abbey, on June 14 at 10:30 AM, with a fellowship hour following the service.

Susan Ann Hottle-Schultz, a resident of Annapolis, MD, since 1989, died on June 1 after several courageous bouts against debilitating illness. She is survived by her husband, Frederick L. Schultz (to whom she had been married for 42 years),... View Obituary & Service Information

The family of Susan Ann Hottle-Schultz created this Life Tributes page to make it easy to share your memories.

Susan Ann Hottle-Schultz, a resident of Annapolis, MD, since...

Send flowers to the Hottle-Schultz family.