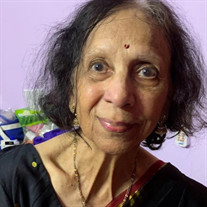 On May 4th, a beautiful, brave woman peacefully passed away at home in Annapolis, MD due to complications associated with Parkinson&#8217;s disease. Known as Rani (queen) to Ramesh, her devoted husband of 52 years; Mom to her son, Atul, and... View Obituary & Service Information

The family of Suchita R. Dighe created this Life Tributes page to make it easy to share your memories.

On May 4th, a beautiful, brave woman peacefully passed away at...