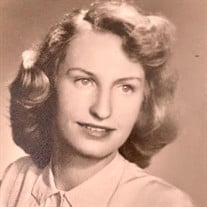 Shirley Fredericks, 84, died on Thursday, July 15, 2021, peacefully at her home in Annapolis, Maryland. She was born on October 9, 1936, to Edward and Henrietta Skepton. Shirley and her four siblings, Joseph, Dorothy, Paul, and Frank were raised on a working farm in Pennsburg, PA. In 1954, she graduated from Upper Perkiomen High School in East Greenville, PA. After a 6-month courtship, Shirley married Theodore “Ted” Fredericks, 90, on February 12, 1955. Ted, a city kid, recalled with amusement the directions Shirley gave him to her family’s home, which included “turn right at the large tree.” After driving down a long country road, Ted described seeing Shirley standing on a hill wearing a billowing peasant style blouse. “That was it for me,” he said. The couple lived in Philadelphia, PA, and several towns in New Jersey before settling in Willingboro, NJ, for over 40 years. There they raised two daughters, Lorraine and Theresa. In 2014, Shirley and Ted moved to the senior living community Gardens of Annapolis located in Annapolis, MD. Ted was by Shirley’s side when she passed. They were married for over 66 years. Shirley worked for Sears, Roebuck & Company for nearly 30 years in a variety of roles, from customer service to selling tires. She loved the water and enjoyed annual beach vacations with her family. Shirley also liked to play cards, go for bike rides, bake, sing, and dance. She was a talented storyteller with an enviable memory and excellent sense of humor. Late into life, Shirley could rattle off the names of her grade school teachers and childhood friends, as well as lyrics from just about every song she ever heard. Shirley wrote and produced an original song entitled “Who’s the Greatest Nanny in the USA Today,” which she taught to her 4 grandchildren and 7 great-grandchildren, as well as several great nieces and nephews and some family friends. (Spoiler alert: the answer is “Nanny Fredericks.”) Shirley leaves her memory to be cherished by her husband Ted Fredericks of Annapolis, MD; her daughters Lorraine Kelly and her husband Joe of Old Bridge, NJ, and Theresa Pierno and her husband Bob of Annapolis, MD; her grandchildren Julie and her husband Jay, Robert and his wife Jess, Ted, and Susan and her husband Mark; and her great-grandchildren Jack, Ryan, Bennett, Tella, Esmae, Sophie, and Henry; her siblings Joseph Skepton and Dorothy Smart, numerous other relatives, and beloved pets.

Shirley Fredericks, 84, died on Thursday, July 15, 2021, peacefully at her home in Annapolis, Maryland. She was born on October 9, 1936, to Edward and Henrietta Skepton. Shirley and her four siblings, Joseph, Dorothy, Paul, and Frank were raised... View Obituary & Service Information

The family of Shirley Fredericks created this Life Tributes page to make it easy to share your memories.

Send flowers to the Fredericks family.