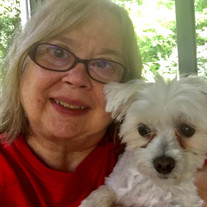 Sherry Regina Hawkins, 70, of Annapolis, Maryland, passed away, June 8, 2020, after a year-long battle with Ovarian cancer. Sherry was predeceased by her parents, Howard and Margaret Stull, her daughter, Julie Hawkins, and her granddaughter, Brittney Ramirez. She is survived by her husband of almost 47 years, Ronald, her sister, Sally Sauls, her niece, Christina Chalker, her great-granddaughter, Ava Ramirez, and her many friends. Sherry was born April 1, 1950, in Warren, Ohio. She was a 1968 graduate of Newton Falls High School. In 1969, her father took a position at Fort Meade, Maryland, and the family moved to Odenton, Maryland. Sherry began her administrative career working for a Maryland company, but soon transferred to Singer-Link, a company in Laurel, Maryland, who made aircraft simulators for the government. She was quickly promoted to Project Assistant, working for several company engineers. In July, 1973, she married Ronnie and moved to Edgewater, Maryland. Shortly thereafter, she began her long and successful career with the Anne Arundel County, Maryland, Public School System. Sherry first worked in the Purchasing Office. Her transfer to the Central Office as a Switchboard Operator (How many can remember what a switchboard is?) gave her the opportunity to make her “climb to the top.” She moved to the Division of Human Resources, where she was a long-time, valued team member. Sherry worked as a System Trainee Analyst, Personnel I Analyst (now a Human Resource Support Specialist), and served as a Human Resources Information System Specialist, until her retirement in 2005. Sherry was also honored to serve as a Project Manager, for implementation of a new Human Resources Software package, reporting directly to the Director of Human Resources. “Retirement” did not stop her. She was asked to bring her many talents and boundless energy back to the department, as a temporary Professional Support Employee. Sherry continued to work on many, varied projects, from September 2005 until October 2016. Throughout her permanent and temporary positions, Sherry was instrumental in many of the efforts put forth to improve the quality and overall support services provided by Human Resources, to the ultimate benefit of all Anne Arundel County Public Schools employees. She was knowledgeable, professional and respectful to all, running her department with thoughtful and caring leadership. In 2001, Sherry was the Anne Arundel County School System’s selection to receive the TWIN Award, which honors women who have made significant contributions to industry in managerial, executive, supervisory and/or professional roles. She considered this Award to be one of her greatest professional achievements. Sherry was blessed to have many friends, but she considered a few to be her “sister” friends. She treasured the special bonds of love and support they shared equally. Sherry enjoyed reading, TV shows, “America’s Funniest Home Videos,” “Family Feud,” “The Middle,” and “The Andy Griffith Show.” She liked an occasional trip to gamble at the Penny and Nickel slot machines, and was a lifelong fan of singer, Paul Anka. She had a great sense of humor, loved to laugh and was always ready to start a good conversation. Sherry loved spending time with friends and family, especially her great-granddaughter, Ava. She died peacefully at home. Sherry was a believer in Jesus Christ, and now rests in Heaven, with all the loved ones gone before her. She will be missed, until we are reunited with her. Sherry’s ashes will be buried, in a private ceremony, along with the ashes of her daughter and granddaughter, in Hillcrest Cemetery, Annapolis, Maryland. A celebration of her life will be scheduled at a later date. In lieu of flowers, donations can be made in Sherry’s memory, to the SPCA, 1815 Bay Ridge Avenue, Annapolis, MD 21401.

Sherry Regina Hawkins, 70, of Annapolis, Maryland, passed away, June 8, 2020, after a year-long battle with Ovarian cancer. Sherry was predeceased by her parents, Howard and Margaret Stull, her daughter, Julie Hawkins, and her granddaughter,... View Obituary & Service Information

The family of Sherry Regina Hawkins created this Life Tributes page to make it easy to share your memories.

Send flowers to the Hawkins family.