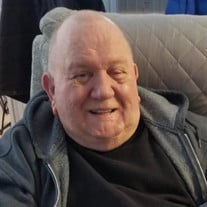 On May 11, 2021, Roy Mark Everhart (71) loving father, grandfather, brother, uncle and friend, passed away peacefully surrounded by family at Anne Arundel Medical Center. Roy was born on January 30, 1950 in La Plata, Maryland. One of eight siblings, he was raised in College Park, MD and remained in Maryland until 1998. After suffering a stroke in 1998, Roy moved to Vacaville, California with his sister, Joyce and brother in law, Marv. He remained in California until 2020 when he moved back to Maryland to be closer to his children and grandchildren. Roy worked in construction and became a master in his field. He could build anything and would often help friends with large projects. People would say, he was a jack of all trades. Roy was a friend to everyone he met and made you feel like family immediately. His outgoing personality could brighten even the darkest day. A social butterfly, he could strike up a conversation with anyone and never forgot a name. The simplest pleasures in life brought great joy to Roy. He loved to sit and look out the window and watch the squirrels and birds. Napping in his chair with his grand dogs, Luna, Honor and Scotty. Enjoying his evening cherry vanilla ice cream and you always had to have a supply of Oreos for an afternoon treat. He is survived by his children Jeffrey Everhart (Kimberly) of Pasadena, MD and Jake Everhart (Aleasha) of Laurel, DE. His grandchildren Matthew Zinkgraf (Morgan), Makayla Everhart, and Jay Everhart. His siblings Joyce Hatch (Marv), Tim Everhart (Nita), Linda Zoller, Rex Everhart (Sue), David Everhart (Laurie), Jan Walker (Butch) and his ex-wife and friend Elizabeth McGinniss. A loving Uncle to many nieces and nephews. Preceded in death by his parents Horner and Alma Everhart, his brother Jerry Everhart, and his brother-in-law Chuck Zoller. The family would like to say a special thank you to the staff at Anne Arundel Medical Center CCU for their compassion and empathy during a very difficult time.

The family of Roy Mark Everhart created this Life Tributes page to make it easy to share your memories.

Send flowers to the Everhart family.