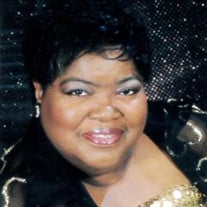 Rose Alexander was born on February 28, 1958 to Frank and Mary Parker in Washington DC. She was called to God on February 11, 2020. She was an active member of Mt. Olive AME church. She was an early years Sunday School teacher and a member of the graduation committee. Rose was educated through the Anne Arundel County Public School system and graduated from Annapolis High School in 1976. While in high school she worked at Gino's and Arinc through the work study program. She enjoyed working because she enjoyed money and being independent. After high school she gained employment through the social security department where she did clerical duties. In 1983, Rose met the love of her life, Stafford Alexander Jr. of Orange, Texas. They were later married and moved to Nuremburg, Munich, Germany where Stafford was stationed by the Army. This matrimony blessed Rose with her first and only son, Stafford Alexander III in 1986. In 1987 Rose moved back to Maryland where she started working for the federal government on Fort Meade. She excelled in her duties where she did retirements, job placements, healthcare and benefit packages along with plenty of other HR functions. She earned and maintained a civilian rank of GS-11. Rose enjoyed traveling and attending her son's sporting events. She was always the one to volunteer to be the team mom. One of her favorite things to do was watch the Dallas Cowboys win after church on Sunday, her favorite day. In 2018, Rose was blessed with a grandson, who she loved to cherish and spend time with. In her free time Rose did plenty of volunteer work with Boy Scouts of America, Happy Helpers, and the Child and Youth Services on Fort Meade. Rose leaves behind to cherish her memory a son, Stafford Alexander III; a grandson, Roman Stafford Alexander; her Mother, Mary Louise (Parker) Johnson; a brother, Kenneth L. Parker; also three sisters, Paulete Watkins (deceased), Bonnette "Bunnie" Watkins, Renee Watkins; and three brothers, Connell, Don, Juan Watkins; also, two sisters Unika Watkins and Centtia Watkins, and brother Eric Watkins. She has also left behind a host of Aunts, Uncles and cousins.

Rose Alexander was born on February 28, 1958 to Frank and Mary Parker in Washington DC. She was called to God on February 11, 2020. She was an active member of Mt. Olive AME church. She was an early years Sunday School teacher and a member of... View Obituary & Service Information

The family of Rose Marie Alexander created this Life Tributes page to make it easy to share your memories.

Send flowers to the Alexander family.