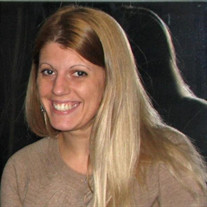 Robin Marie Beyak January 18, 1980 May 31, 2021 My soul is painted like the wings of butterflies Fairy tales of yesterday, grow but never die I can fly, my friends The Show Must Go On, Queen Robin Marie Beyak slipped the surly bonds of this world on May 31st, 2021. A loving daughter, sister, and good friend to so many, Robin was born in Saratoga, New York, on January 18, 1980. She was raised for much of her childhood years in Glen Burnie, Maryland. She is survived by her parents Peter and Judy Beyak, her mother Laura Haun; grandmother Barbara Ghiroso, grandfather Clifford Hawley, siblings Kathy Kraft and husband Zach, Stacey Folkemer and husband Paul, Matthew Long and husband Jeffrey, Jamie Haun and wife Bunch, and Johnny Haun and wife Elizabeth. She leaves behind her nieces and nephews; Kira Beyak, Taylor Kraft, Xander Kraft, Maggie Folkemer, and Archie Long. Additionally, many aunts, uncles, and cousins. Lastly, she leaves behind her fiance Michael Parks, his daughter Hailey, and two loveable cats, Ham and Zappy. She was preceded in death by her grandparents, Richard and Rosemary Beyak, Sybil Hawley, Leonard Ghiroso, and her uncle, David Hawley. Robin attended both Old Mill High School and Glen Burnie High School. She went on to graduate from the University of Maryland, College Park, where she earned her Bachelor of Science in Electrical Engineering. She worked for over a decade as an electrical engineer for the United States Navy. First with the Naval Sea Systems Command working on jammers and other equipment to protect military servicemembers around the globe. She then moved to the Naval Air Systems Command, where she served as an engineer working on upgrading the communications systems of the M/H-60R/S Seahawk helicopters. Most recently, she and her fiancé started their own engineering consulting firm, Green Shoe Garage, which they dreamt would be a way to make the world a better place while also starting a new chapter in their lives. Robin was a fervent believer in fighting injustice wherever she saw it. From donating to groups such as the ASPCA and ACLU to working at her local soup kitchen during the peak of COVID-19, Robin was committed to improving the human condition. Even in death, Robin continues to help others as she elected to be an organ donor. One of the biggest passions in Robin's life, second perhaps only to friends and family, was music. Some of her favorite artists included Queen, David Bowie, and Primus. From playing the piano and guitar to her eclectic record collection, Robin's soul thrived whenever music was in the air. Undoubtedly, countless playlists of Robin's friends and family have been influenced by her infectious attitude toward the musical arts. Robin's gorgeous and slightly mischievous smile was her trademark that could brighten the darkest of your days. She was and will continue to be loved by so many. A private graveside ceremony for the family will be held on June 9, 2021, at Bestgate Memorial Park in Annapolis, MD. A celebration of Robin's life will be held at a later date. For those who wish to make a contribution to the ACLU in Robin's memory, please visit gofundme.com/f/honoring-the-life-of-robin-beyak. The family respectfully asks you to consider donating in lieu of flowers. Thank Heaven! the crisis, The danger, is past, And the lingering illness Is over at last— And the fever called "Living" Is conquered at last. Excerpt from Robin's favorite poem For Annie by Edgar Allen Poe Burial will private. A memorial gathering will be held at a future date to be announced.

Robin Marie Beyak January 18, 1980 May 31, 2021 My soul is painted like the wings of butterflies Fairy tales of yesterday, grow but never die... View Obituary & Service Information

The family of Robin Marie Beyak created this Life Tributes page to make it easy to share your memories.

Send flowers to the Beyak family.