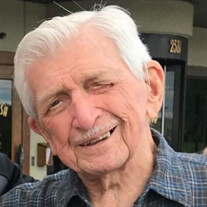 Robert Herman Rehborn, of Wilmington, Delaware, died on Saturday, February 6, 2021 at the age of 96. He was born August 14, 1924 in Philadelphia, Pennsylvania. Robert was married to Doris Lee Broughton of Janiero, North Carolina (deceased June 2001) on April 12, 1944. Robert served with distinction in the U.S. Marine Corps as an aircraft engine mechanic for fighter aircraft from 1942-1946 where he was awarded 12 different medals prior to separating as a Technical Sergeant. For most of his adult life, he worked for Metal Edge Industries, retiring as Vice President of Sales. “Rockin’ Robert”, as he was known to all who loved him, was a great socializer and story-teller. He enjoyed many summers at his family beach home in Ocean City, NJ, where generations of Rehborn and Diener families grew up vacationing together. He was an avid Philadelphia Eagles football fan, attending every game held at Veteran’s Stadium since 1971 until recently when physically unable to make the trips. He watched on TV, with great joy, when the Eagles won Super Bowl LII in 2018. Robert is survived by his son Robert Charles Rehborn (Sandra) of Williamsburg, VA; daughter Bonnie Lee Habicht (William) of Wake Forest, NC; son Kenneth Wayne Rehborn of Nathrop, CO; grandchildren Diana Rehborn, Mindy Hidenfelter (Kevin), Lori Greenlee (Eric), Kaysi Sanden (Jeffrey), Robert Habicht, and William Habicht; and ten great-grandchildren. He was preceded in death by his parents, Helen Grace and Tracy Durnell Rehborn of Philadelphia, PA, and siblings Virginia (Albert Diener), and Tracy Jr.

The family of Robert H. Rehborn created this Life Tributes page to make it easy to share your memories.

Send flowers to the Rehborn family.