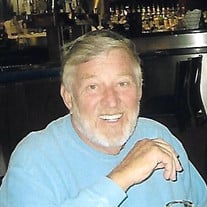 Richard “Dick” Thomas Sisas, 79, of Annapolis, died on Friday, February 21, 2020 with his loving daughter Dianna by his side. He was born in Brooklyn, New York on June 5, 1940 to the late Richard and Amy Sisas (Moore). He graduated from George Westinghouse Vocational Technical High School and enlisted in the U.S. Navy in 1958, only to be honorably discharged six months later due to the death of his father. In December 10, 2019, Dick was pre-deceased by the love of his life of 58 years, Carol Ann Sisas. He was also pre-deceased by his eldest daughter Dawn Marie Sisas and his brother John Robert Sisas. Dick is leaving behind his children Rick, Dianna, Dan, and David, daughter-in-law Meropi “Bobbi” and sister in-law Diane Rinaldi. Dick and Carol married on September 23, 1961 and soon after started a family in Brooklyn, New York. They moved to Holtsville, Long Island, New York where the kids kept coming, until they happily settled into the bustling, chaotic, laughter-filled life of a family of 7. Dick began his career selling commercial kitchen equipment, smallwares and wiping cloths, where he quickly excelled as the number one salesman, and embraced the name ‘Ragman.’ The company relocated his family to Maryland in 1978. Soon after, Dick launched his very own Sisas Industries. In the years to come his sons Rick, Dan and David followed their father’s footsteps and joined the newly formed Take Two Unlimited. The family business grew to be extremely successful, meeting the needs of customers while spreading the humor and kindness that reflected Dick’s easy nature. With his quick wit and playful heart, Dick’s ability to find levity in any situation was his trademark. He brought joy, laughter and most often a clever nickname to all who knew him. Dick loved music and could often be found whistling or singing, sharing his belief that “you cannot whistle and worry, you cannot sing and worry at the same time.” In essence, Dick embodied the ability and resiliency to navigate the most difficult of life scenarios with kindness and grace. Dick and Carol spent the last 8 years of their lives in West Palm Beach, Florida where they enjoyed the warmth, sunshine and companionship of Dick’s closest childhood cousins, Carol and Richie. Beloved husband, father, cousin, uncle and friend, Dick will be dearly missed. Celebration of Life: Lasting Tributes, 814 Bestgate Road, Annapolis. Viewing 2pm, Service 3pm.

The family of Richard Thomas Sisas created this Life Tributes page to make it easy to share your memories.

Send flowers to the Sisas family.