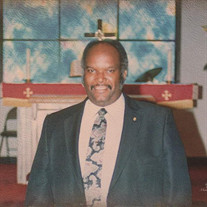 Richard Henry Jones, “RH,” age 75, died Saturday, November 17, 2018 at home following complications related to prostate cancer. He was in hospice care for only a couple days before his death. RH died peacefully in his sleep. RH was born to the late Warren Jones Sr. and Marjorie Dato-Jones on December 30, 1942 in Pleasantville, New Jersey. Without virtually any familial support and while in the custody of the New Jersey State Foster Care system, RH learned at a very early age that education would play a major role in his life. He began that journey at Woodland Avenue Elementary School and went on to graduate from Pleasantville High School, where he maintained a 3.5 G.P.A in honors classes. While in high school, RH was also selected to participate in the New Jersey All State Choir. Upon graduation from high school in June 1960, RH enlisted in the United States Marine Corps. He was stationed at times in South Carolina, Puerto Rico and the Bahamas. After attaining the rank of corporal, RH received an honorable discharge in 1965. Although recommended for reenlistment, he declined and accepted a post in the Reserves. Armed with the Vietnam-era G.I. Bill and a prayer, RH enrolled in Morgan State College (now University) and took classes during the day and worked at night. It was at Morgan that RH met the love of his life, Paulette. After taking a calculus class together, RH began to pursue Paulette by asking her out for dinner dates. Eventually, she gave into his unrelenting pursuit—culminating in their nightly dinners together for the next 46 years! After graduating from Morgan, RH held a variety of jobs for the next 40 years. He began working at the National Security Agency. That experience led him to later work with a variety of contractors in the federal arena. He left the federal arena and accepted employment with the State of Maryland. After 26 years working for the State, he retired from the Department of Transportation as a manager in the Department’s Customer Service Division. The Honorable Martin O’Malley presented RH with the Governor’s Citation in appreciation for RH’s outstanding service to the citizens of Maryland. As he anticipated his inevitable retirement, RH began to transition toward other endeavors. The one endeavor that blossomed into a brand new world of relationships was his work as a D.J. He dubbed himself, the “Goodie Man” and became one of the most highly sought-after event D.J.’s in the Baltimore-Washington metropolitan area. Given his vast and unique collection of music, there was not a party, cookout, graduation party, crab feast, bull roast or wedding that was safe from his mixer or turntables. Although music became his passion, RH was long known for his positive outlook on life and sense of humor. He served many years as member of various choirs at Hall United Methodist Church. His membership at Hall United continued for more than 40 years. While a member of Hall United Methodist Church, RH was a leader and Chair of the Administrative Council, member of the Finance Committee and the Trustee Board. He cultivated a strong passion for bible study. He was tireless in his dedication and preparation for classes, which often yielded high attendance and participation—a result of his unique ability to convey “the word” in a manner that everyone could understand. RH loved to travel and spend time with family. His travels took him around the world to many countries in western Europe-including an extended stay in Germany for a year. He also visited Canada and most of the lower 48 states and Hawaii. RH was ever ready for an impromptu get together. He found great joy when the family gathered to play games, listen to music and engage in one of his favorite pursuits---GOOD FOOD! Whether he was baking cookies or watching movies, RH loved spending time with his 5 grandchildren. If the children desired it, RH would even try his hand at an occasional video game (but not for very long). Richard Henry Jones faced, during his lifetime, what to many, might have been insurmountable odds. He overcame those obstacles and leveled the playing field, by turning those challenges into opportunities for success. By virtue of the power of his faith in GOD, RH went on to build a life and a legacy that will be remembered for generations to come. He was a man whose passions helped him create a family. He was a man who cultivated an extended family and a host of friends. As he was, he was unique in so many ways, yet in other respects, he was simply a humble man. Happy are we in the Lord for his many blessings. RH leaves to mourn his passing, his wife, Paulette; son, Adrian (Christy), daughter, Monica Jones-Ayileka (Bobola), grandsons, Adrian (Jade), David, Blaze, Hayes and only granddaughter, Skye. He is also survived by his sisters, Warretta Williams and Verrell Randolph and brothers Donald Jones, Edward Jones, Frank Jones and Paul Jones. In addition, left to cherish his memory are is father-in-law, Clayton Greene, Sr., sister-in-law, Ruth Allen, brother-in-law, Judge Clayton Greene, Jr. (Janice), nephews, nieces, and a host of relatives and friends.

Richard Henry Jones, &#8220;RH,&#8221; age 75, died Saturday, November 17, 2018 at home following complications related to prostate cancer. He was in hospice care for only a couple days before his death. RH died peacefully in his sleep. RH... View Obituary & Service Information

The family of Richard Henry Jones created this Life Tributes page to make it easy to share your memories.

Send flowers to the Jones family.