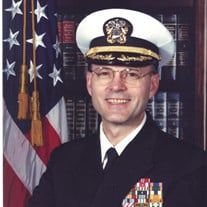 **The livestream link for Richard's service will be posted on the Tribute Wall at 10:30 am on Saturday, September 26, 2020** Captain Richard V. Gragg, USN, Retired, passed away with his wife by his side September 14th, 2020 after a long battle with cancer. Richard was born on December 27th, 1943 in Alma, Illinois to his mother, Rhea M. Purcell and his father Ora Vernon Gragg. The youngest of three children, Richard began work at an early age, securing a newspaper delivery route in the 5th grade and later working in his father’s farm equipment business while attending high school in Centralia, Illinois. After graduating from high school, Richard went on to attend college at Southern Illinois University, graduating in 1967. Richard began his 30 years of service with the United States Navy after college. Receiving his commission in May, 1967, at the Officer Candidate School in Pensacola, Florida. After he served in Vietnam as a Naval Intelligence Liaison Officer at Cam Ranh Bay with the Navy “Market Time” patrol forces, he then supported Seal Team 1 and the Twenty First ARVN Division in Bac Liiu. He received the Bronze Star Medal for Valor for his service in Vietnam. Richard went on to serve with pride and devotion in Japan, Iceland, Singapore, Hawaii, San Diego, Operation Desert Storm, the Pentagon, and on the USS Independence, USS Midway, USS New Jersey, USS Missouri, USS Saratoga, and the USS Long Beach. He received a Master of Science in Information Technology from Syracuse University in 1997 while in the Navy. After retiring from the Navy in 1997, Richard tirelessly supported our Armed Forces and the Intelligence Community as a Department of Defense contractor working for Polexis, CACI, and the University of Maryland Eastern Shore. He directly supported a number of defense agencies during this period which included the Naval Research Lab (NRL), the Defense Advanced Research Projects Agency (DARPA), the Defense Intelligence Agency (DIA), and the Defense Information Systems Agency (DISA) at Ft Meade, Maryland. At DISA, he was Chief of the Integrated Imagery and Intelligence (I3) branch for the Global Command and Control System - Joint (GCCS-J) program that the Armed Forces depend on around the world. He retired in 2014 to his home in Annapolis, Maryland where he sponsored many midshipmen of the U.S. Naval Academy. While stationed in Japan, Richard met his loving wife of nearly 47 years, Mayumi Oha. Mayumi, who worked for Japan Airlines when they met, shared the excitement and adventure of traveling the world and immersing themselves in different cultures. Together they traveled and lived in many different countries. They went on to have a daughter, Erica, and a son, Ken. Richard had such a passion to explore the world and meet new people that he and Mayumi traveled abroad even while he was undergoing treatment for cancer. He had a true love and acceptance of people of all faiths and ethnicities. He found joy in studying religion and history, sailing on the Chesapeake Bay, and indulging his small grandchildren. Richard is survived by his wife, Mayumi Gragg of Annapolis, Maryland, his sister, Sue Campbell, and brother-in-law Rich Campbell of Traverse City, Michigan. He leaves behind two children, Erica Chambers of Washington, DC and Ken Gragg of Asheville, North Carolina, his grandchildren Kai and Koda Gragg and his daughter-in-law, Bianca Gragg of Asheville, North Carolina. He was preceded in death by his brother, John Gragg of Manvel, Texas, his mother Rhea M. Gragg, and his father Ora Vernon Gragg. A memorial service will be held on Saturday, September 26 at 11:00 am at St. Margaret’s Church. Due to Covid19 restrictions, in-person attendance will be limited so the family invites all guests to attend virtually. Live stream information can be located via Richard’s Tribute page at www.LastingTributesFuneralCare.com. Interment at Arlington National Cemetery will take place at a future date. The family will receive guests at the Eastport Yacht Club, Annapolis, MD from 1:30-4:00 pm. Food and fellowship will be shared at the Yacht Club's outdoor covered patio. In lieu of flowers, the family asks that donations in Richard's name be made to one of the following organizations: Wellness House of Annapolis, St. Margaret’s Church, Hospice of the Chesapeake and Wounded Warriors

**The livestream link for Richard's service will be posted on the Tribute Wall at 10:30 am on Saturday, September 26, 2020** Captain Richard V. Gragg, USN, Retired, passed away with his wife by his side September 14th, 2020 after a long battle... View Obituary & Service Information

**The livestream link for Richard&#39;s service will be posted on...