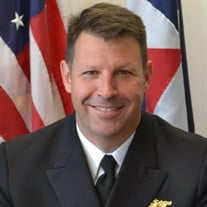 ** Due to connectivity issues at the venue, Rick’s service was recorded and has been posted to his Tribute Page under the "Photos and Videos" tab ** Richard T. Brennan, Jr. was born in Corpus Christi, Texas to Richard (Dick) T. Brennan, Sr. and Lois (D’Alessandro) Brennan and grew up in Orlando and Apopka, FL. Rick was a 1986 graduate of Apopka High School and went on to earn a Civil Engineering degree at The Citadel in Charleston, South Carolina. He began his career working in bridge engineering and inspection. However, his lifelong career and passion began when he joined the National Oceanic and Atmospheric Administration (NOAA) Officer Corps in 1992. He had a long and exciting career in hydrography serving on ships, mobile field units, bases and headquarters that took him from the Atlantic to the Pacific, the Gulf of Alaska to the Gulf Coast with many stops in between before ending in Silver Spring, MD. During his tenure with NOAA he earned a Master’s Degree in Ocean Mapping from the University of New Hampshire. In 2020 he was elected President of The Hydrographic Society of America. He reached his career pinnacle when he was promoted to Rear Admiral, Director of Coast Survey weeks before his death on May 13, 2021. He was 52 years old. Rick was so much more than a hydrographer and NOAA Corps officer. He was a creator, builder, problem-solver, relationship builder, wood worker, artist, animal whisperer, jokester, and all around fantastic human being, brother, son, husband, and father. He could engineer and build things to solve simple problems or design solutions to big ones. He loved boats and the ocean, adventures, beautiful flowers, animals of all kinds and mostly, his family. He found beauty everywhere he went and was always looking forward to the next great adventure. Rick left behind a sea of people who dearly loved and admired him, none more than his family. Rick met his wife Tracey while on his first assignment on the NOAA Ship RUDE and they enjoyed more than 27 years married. Their life together was an adventure and took them from the East to West coasts, yet centered around their two sons Ty and Sam. Rick made it very clear that no love was greater to him than that of his wife and sons. Rick is survived by his parents, Lois and Richard (Dick) Brennan, three sisters, Mary Boyd and her husband Clint Boyd of Canton, GA, and Lara Brennan and Cindy Brennan of Apopka, FL. His remaining family includes two nieces, four nephews and a host of aunts, uncles, and cousins. In lieu of flowers, donations may be made in Rick's name to the American Cancer Society. https://www.cancer.org/involved/donate.html ** Due to connectivity issues at the venue, Rick’s service was recorded and has been posted to his Tribute Page under the "Photos and Videos" tab **

** Due to connectivity issues at the venue, Rick&#8217;s service was recorded and has been posted to his Tribute Page under the "Photos and Videos" tab ** Richard T. Brennan, Jr. was born in Corpus Christi, Texas to Richard (Dick) T. Brennan,... View Obituary & Service Information

** Due to connectivity issues at the venue, Rick’s service is being recorded and will be posted to his tribute page by Saturday, May 22 at 12:00 pm.

** Due to connectivity issues at the venue, Rick’s service was...