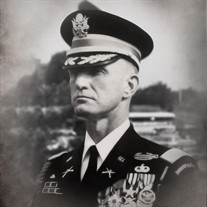 Brigadier General (Ret) J.F. Hennessee (“Frank”), 77, passed away June 2, 2020 in his Heritage Harbor home with his wife, Cam, at his side. Frank (West Point ’65) was a decorated veteran who served for 33 years in the U.S. Army. Frank, the only child of Jack and Frankie Hennessee, was born on January 31, 1943 in McMinnville, TN where he went on to captain his high school football and basketball teams and graduate as class valedictorian. As a cadet, Frank marched at President Kennedy’s funeral, was recognized for outstanding leadership and met Carol Cameille Maertens (“Cam”) whom he wed in December 1965. Frank would go on to serve with the 4th Infantry Division in Vietnam where he earned the Silver Star and a Bronze Star. During his time in the Army, Frank served in command positions in the 82nd Airborne Division, 4th Infantry Division, the Berlin Brigade, the 3d U.S. Infantry Regiment (The Old Guard) and the 10th Infantry Division. He also held key staff positions in the Pentagon, CENTCOM, USAEURER and TRADOC. Frank’s most prized military achievement was the respect, appreciation and high performance of his soldiers. After retiring from the Army, Frank continued to serve his country with executive positions at the Old Soldiers Home and the Army Distaff Foundation (Knollwood) in Washington, D.C. Frank enjoyed playing sports, watching sports and dancing with Cam. Frank and Cam made Annapolis their home for the past twenty years. He is survived by his three children, Rachael, Marc and Jon and four grandsons Cormac, Konnor, Ryan and Jack. In lieu of flowers, the family requests donations be sent to the Lewy Body Dementia Association, Inc www.lbda.org or 912 Killian Hill Road S.W. Lilburn, GA 30047. There will be a social distanced, drive up visitation on June 6 from 9am-11am at Lasting Tributes in Annapolis. A military funeral at Arlington National Cemetery will be held at a date to be determined.

The family of Brig. Gen. RET J.F. "Frank" Hennessee created this Life Tributes page to make it easy to share your memories.

Send flowers to the Hennessee family.