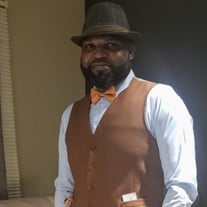 Randy James Sellman, at 45 years young passed unexpectedly at Baltimore Washington Medical Center on March 19, 2020. He was born on January 29, 1975, in Annapolis, Maryland. Randy was a graduate of Annapolis Senior High School. He leaves in memory his mom, Shirley Mae Sellman, grandmother, Ella Louise Sellman, his daughters, Sierra LaTrese Sellman, Alexia Justice Sellman, his sisters, Monique Vanessa Sellman-Leigh, Jacinta Latoy Sellman, uncles Larry “James” Sellman and Thomas Leon Sellman (Janelle), aunts, Sally Ann Sellman, Rosita Alesia Parks and nephews Malcolm Arthur Leigh, Brandon “James” Leigh, niece Vanessa Marie Leigh and a host of great aunts, uncles, cousins, and friends. He was known as “Pop-Pop” to Khiyon Washington, Ny’Bree Collins, Kemori Collins, Kole Collins, Kali Blake and Dax Woodson. The last 5 years of Randy’s life he was living his best life in love and enjoying life. He met a very special woman, Melanie Gayle Taylor and they lived their lives together happily in Glen Burnie, Maryland with their dogs “Buffy and Stitch”. Melanie taught Randy the vegan lifestyle. She challenged him to a year of being a vegan, Randy of course continued. She was a blessing to him. Thank you Melanie for showing him such a great loving relationship. For more than half of his life he was the CEO, President and laborer of his own company, RJ Sellman Construction. His talents are shown in many homes around Maryland. He always did work for others as if he lived there also. The last 2 years he shared his talents at the Kipp Academy. The one career that Randy loved more than making peoples homes beautiful was being a dad. His girls were always his pride and joy. He prided himself on being a good dad to Sierra “CeCe” and Alexia “Lexi”. They are grown women, but to him they were always his babies. Randy’s dedication to his family was out of this world. Randy was one of the children who helped take care of his grandmother. Every Thursday Randy would come to his grandmother’s house, who he referred to as “Ma”, to assist in any way he could from cooking, bathing, or even changing her dressings (everyone else seemed to frighten). Besides being a dad he had many hobbies such as, cooking, fishing, pool, dice, dominos, spades, and just being “Handy Randy”. If you ever had the privilege of enjoying any of these hobbies with him, I am sure you smelled “peppermints”. Randy loved a fresh peppermint at all times. Even though Randy didn’t have the best singing voice or dance moves, that never stopped him from trying to bust a move on the dance floor or behind the wheel. We will miss you always Randy, because we only had 45 short years with you, but we know you are still looking out for all of us as always, “Because Everyday “You’re Hustling”! Love you Randy, from all of us that had the privilege of crossing your path, until we meet again.

The family of Randy James Sellman created this Life Tributes page to make it easy to share your memories.

Send flowers to the Sellman family.