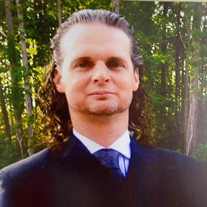 Chris was universally loved and admired by everyone he touched along his way through life. If you are reading this, you probably already know that. He was born with a smile that could light the world around him as well as touch a single heart. Amiable and good-natured, Chris was a “glass overflowing” optimist, carrying his positivity into every relationship and endeavor, equally kind and giving to all he knew. He had a deep reverence for and curiosity about Planet Earth and its inhabitants, whether plant or animal, fish or fowl, insect or T-Rex. They were all amazing to him. As a child, he nurtured Max, his pet iguana, and “Charlie the chinchilla.” As a kindergartner, Chris rescued a little bird in distress and enlisted his Mom to take it to the local bird sanctuary. Unfortunately, the sanctuary staff had the worst news a few days later, but the experience launched Chris into his lifelong love affair with all living things. Yes, even spiders and scorpions (yikes)! An accomplished craftsman and contractor, Chris reveled in taking ownership of projects and was known for his patience and meticulous attention to detail. He was an intuitive manager of people, taking them under his gracious wing and inspiring his crews to excellence. And, when it came to his fellow workers, he had an ability to customize his management approach to accommodate those less capable. His strategic insight informed everything he did, whether guiding a complex project through its life cycle or excelling at chess. Intellectually curious, Chris was fascinated by ancient and medieval European culture, reflected in his eclectic taste and the unique artifacts he collected, as well as the special environments, indoors and out, that he created for friends to enjoy. He never missed the annual Renaissance Festivals and often attended the ultimate counter-culture event known simply as “Burning Man.” Above all, Chris treasured contentment. He was highly sentimental about people, places, and things, and he loved nothing more than spending time with his family. We will deeply miss his sense of humor, his compassionate nature, and his gentle and caring ways. Should you wish, you may honor Chris’ generosity and love for nature by making a donation in his name to the Chesapeake Bay Foundation at www.cbf.org.

Chris was universally loved and admired by everyone he touched along his way through life. If you are reading this, you probably already know that. He was born with a smile that could light the world around him as well as touch a single heart.... View Obituary & Service Information

The family of R. Christian Pittillo created this Life Tributes page to make it easy to share your memories.

Chris was universally loved and admired by everyone he touched...

Send flowers to the Pittillo family.