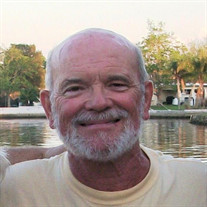 R. Douglas "Doug" Pond, 80. of Crofton, Maryland passed away at home on November 1, 2019 after a long fight with cancer. Family members were at his side in his final hours. He was born to Bob and Elizabeth Pond in Washington, D.C., on April 11, 1939. He spent his early childhood in Arlington, VA, lived briefly in Atlanta, GA when his father was transferred, and grew to adulthood in Silver Spring, MD with his parents and two younger brothers. After graduating from the University of Maryland with a degree in accounting (enhanced by a degree in Business Administration), he worked in private industry for a short time. He then found his life's vocation as an accountant with the U.S. Department of Labor. He retired from DOL's Employment Training Administration in the 1980’s. His life took a dramatic turn in the late 70s when he reconnected with the love and light of his life, Verna, whom he later married. They each brought to the union three children from their first marriages. Verna also brought with her the discipline of regular exercise. That proved impetus enough for Douglas and he was off and running...literally, at 40 years old. He ran with colleagues on the roof of the Labor Department building in Washington. He ran among Washington's monuments. Living in Annapolis at the time, he ran the byways of the state capital and, eventually, served as president of the Annapolis Striders. A fierce competitor, he took on several marathons, including the Marine Corp Marathon in Washington, breaking 3 hours twice. He upped the ante when he joined the Kennedy 50-mile race in Western Maryland. He reached the runner's pinnacle when he ran in the Boston Marathon in the 1980’s. To convince any doubters he wasn't an idler, he added a Century, a 100-kilometer scamper from Philadelphia to Atlantic City. When his running days were behind him, he played golf at courses across the United States. He and Verna lived in a golfing community in North Port, Florida, for a decade and traveled widely in the U.S., mostly with golf clubs in tow. He is survived by many loved ones, including his wife, Verna; brother Stanley Pond (Nancy) and their 3 children and spouses; children: Eric Pond (Amy), Michael Pond (Catherine) and Rachel Pond (Roy); stepchildren: Nikki Blanche (Mike), Yael Beckman (Mark) and Aaron Fortier; Grandchildren: Caitlin and Nina Blanche, Maya, Julia and Luke Beckman, and Sara Byrne (Darren); Great-grandchildren Callum, Adaleah, and Sawyer Byrne. In lieu of flowers memorial donations may be made to American Cancer Society.

R. Douglas "Doug" Pond, 80. of Crofton, Maryland passed away at home on November 1, 2019 after a long fight with cancer. Family members were at his side in his final hours. He was born to Bob and Elizabeth Pond in Washington, D.C., on April... View Obituary & Service Information

The family of R. Douglas "Doug" Pond created this Life Tributes page to make it easy to share your memories.