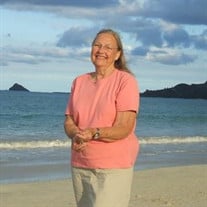 Polly P. Digges, 84, of Annapolis, went to be with her Savior at home on Saturday, January 19, 2019. She was born in Opportunity, WA; the daughter of Clarence E. and Cora Mae (Barringer) Pintler. Polly lived for a short time in Opportunity and Spokane, WA before her family relocated to Kailua on the Island of Oahu, Hawaii, which will always be “home” to her. She graduated from Punahou School in Honolulu, Hawaii in 1952. Some of her fondest memories are being a member of the Dramatics Club and taking part in many of Punahou’s excellent plays at Dillingham Hall, “The Mad Woman of Chaillot” and “The Willow and I” being two examples. She also was a member of the Junior Theater of Hawaii, playing parts in “Incognito” and “Suddenly it was May”. While at Punahou she fell in love with a handsome Army Lieutenant, Bill, whom she married on June 5, 1953, and with whom she spent the next 62 years. Following the man of her dreams, leaving her beloved Islands, she moved to Baltimore, Maryland where the couple set up house. It was a culture shock that Polly never quite got over but grew accustomed to, as she became a wife and mother. Soon after marriage her husband Bill was assigned to an Army unit in Yokohama, Japan, so off they went. Her first daughter, Didi, was born while they were there. After returning to Baltimore, the couple welcomed their second daughter, Cora. In 1959, they moved to Bowie, Maryland where they lived for 7 years and where her son Bill was born. Then they relocated to the country, purchasing an old historic home built in 1699 on 10 acres of land. Needless to say, it needed restoring, which they accomplished during the next 10 years. It was a beautiful home that Polly was proud of and she loved having so much land and open space around her. She enjoyed raising German Shepherd puppies on the “farm”, gardening, and her animals: chickens, cows, pigs, horses, and ponies. Next, following her desire for a home on the water, the couple built a home on the Tuckahoe River in Cordova, Maryland, where she lived until they moved to Annapolis to be near family. In retirement, Polly enjoyed reading, knitting, sewing, cooking, painting, gardening, singing, Bible study, antiquing, and spending time with her family and friends. Polly devoted herself to the church for much of her life and was steadfast in her spiritual study. Friends have said she exemplified a life of joy in the Lord and that seeing her love her husband with respect has been an encouragement to their marriage. Another friend observed that Polly’s love of her husband was evident in her paintings of family, and in her willingness to dance the hula for him, about which he proudly told stories. Polly will be remembered for her dedication to her husband and children who, after Jesus Christ, she considered her most precious gifts. She will be greatly missed by all who loved her and will be remembered in our hearts forever. Polly was preceded in death by her parents, Clarence (Ted) and Cora Pintler, of Hawaii and Japan, and by her husband, Edward William (Bill) Digges, Jr. She is survived by her three children: daughters and sons-in-law Didi and Steve D’Hondt; Cora and Joe Curre of Sammamish, WA; son and daughter-in-law, Edward William (Bill) III and Anne Digges of Purcellville, VA; grandchildren and their spouses, Chris and Vanessa D’Hondt of Lexington Park, MD; Kate D’Hondt of Palm Beach Gardens, FL; Megan and Jeffrey Denton; Erik and Ayumi Curre of Tokyo, Japan; Kyle and Madison Curre of Maple Valley, WA; Benjamin and Connie Digges of Winchester, VA; Jacob and Danielle Digges of VA; Alison and Kevin Kusar of Ashburn, VA; Emily and Austin Rustick of Sterling, VA; Rachel, Clarissa, and Edward William Digges IV of Purcellville, VA; great-grandchildren, Peter and Emma D’Hondt; Gabriel and Thomas Denton; Alyssa Curre; Lucas, Parker, and Nathan Curre; Ian and Sophia Digges; Sebastian, Valerie, Nicole, and Bryan Alvarez; and Lincoln Digges; by her “favorite and only” brother, Peter Cicio Pintler, and sister-in-law, Robin Root; and by nieces Laura Kearney of Colorado Springs, CO; Shelby Dill of Bayou Vista, TX; Jessica Blair of Amarillo, TX; Susan Beard of Atlanta, GA; nephews, Harvey Reid of St. Augustine, FL; Bill Reid of Suwanee, GA, and preceded in death by her nephew Austin Pintler of CO. In lieu of flowers, donations in her name may be made to Newborns in Need, or Meals on Wheels. Funeral arrangements are being made by Lasting Tributes in Annapolis, MD. To share memories of Polly, please sign the online tribute wall at www.lastingtributesfuneralcare.com. A memorial service will be held at the Evangelical Presbyterian Church of Annapolis in the Chapel at 2:00 pm on Saturday, Jan 26th. As Polly would say “Aloha….’Nuff Said….Pau”!

Polly P. Digges, 84, of Annapolis, went to be with her Savior at home on Saturday, January 19, 2019. She was born in Opportunity, WA; the daughter of Clarence E. and Cora Mae (Barringer) Pintler. Polly lived for a short time in Opportunity and... View Obituary & Service Information

The family of Polly Pintler Digges created this Life Tributes page to make it easy to share your memories.

Send flowers to the Digges family.