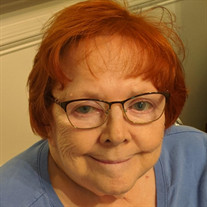 Peggy Ann White, age 77, died of complications caused by Parkinson's disease on October 20, 2021, in Annapolis, Maryland. Peggy is survived by her son, Michael White, of Clarksburg, West Virginia, her daughter, Kathleen White, of Edgewater, Maryland, and her daughter, Nancy White, of Woodbridge, Virginia. She is also survived by her grandchildren, Grace and Gabriella White, of Woodbridge, Virginia, her brother Rev. James Shields of Camp Hill, Pennsylvania, her brother Louis Nyecki and sister Anne Gagne, along with several nephews, nieces, and extended family. Peggy was preceded in death by her husband, Joseph White, on November 8, 2013, and her parents, John Shields and Harriet Nyecki. Peggy was born and raised in Jersey City, New Jersey, and graduated from Henry Snyder High School in 1963. After graduation, she worked for several years in New York City as a telephone operator. Peggy married the love of her life, Joseph White, in 1967, and moved to Milford, Pennsylvania to raise their family. During their 46-year marriage, Peggy was a devoted wife and loving mother who did all she could to help her family. She worked several jobs throughout her life in retail and in the US. Postal Service. She was a member of the Catholic Daughters of the Americas, Court Madonna No. 114, Port Jervis, New York, for several years. Following her husband's retirement, Peggy and Joseph relocated to West Virginia and began the country life they had always wanted by starting a farm. They lived there for 20 wonderful years. After her husband's death, Peggy relocated to Annapolis, Maryland to reside with her daughter. Peggy took great pride in being a wife and mother and was always willing to lend a hand, offer a smile, a prayer, and wise advice. Peggy enjoyed cooking, crafting, shopping, playing cards and most of all, spending time with her children and precious grandchildren. Peggy took great pride in being a Grandmother. Her granddaughters were the light of her life. She was exceptionally proud of them and their accomplishments. She loved her children and nieces and nephews and always prayed for everyone in her family. She bravely endured the ravages of Parkinson's disease for 18 years and never complained. The disease took her mobility away but not her sense of humor, her sweet laugh, warm smile, and loving spirit. She was beautiful, inside and out, and everyone who met her, loved her; it was impossible not to. She was a cherished daughter, wife, mother, sister, aunt, and friend, who was loved by all for her always happy disposition. Her family and friends will always remember her as a pleasant, loving, fun, generous, patient, gentle, kind woman, who loved life. She had a strong faith in the Lord and the teachings of the Church and she now rests in Heaven with her beloved husband. A funeral mass of Christian burial is scheduled for Wednesday, October 27, 2021, at 10:30 a.m., at St. John Neumann's Church in Annapolis, Maryland. All are welcome to attend and celebrate Peggy's life. Peggy's family gratefully appreciates the kind and beautiful expressions of love shown during our time of bereavement.

The family of Peggy Ann White created this Life Tributes page to make it easy to share your memories.

Send flowers to the White family.