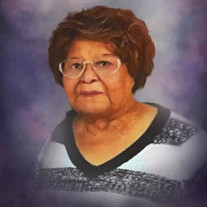 Pearl E. Fuller, went home to be with the Lord on April 27, 2021 at her home. She celebrated her birthday April 19th, 8 days before her transition. She was 91 years old. Pearl was born to the late Enoch and Rosetta Brown Butler in Mayo, Maryland.... View Obituary & Service Information

The family of Pearl Ellen Fuller created this Life Tributes page to make it easy to share your memories.

Send flowers to the Fuller family.