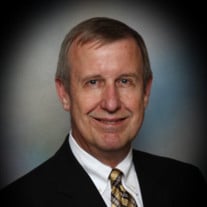 Paul L. Young passed away on February 14, 2021 with his wife and daughter by his side. He was a devoted husband, loving father, and proud Pappy who always had a genuine smile, practical advice, a ready sense of humor. He will be greatly missed. He is survived by his wife of almost 53 years, Patricia (Pat) Saye. They married on February 17, 1968. The great love Pat and Paul shared was deep and apparent to all who knew them, and will inspire his family for years to come. His final hours were filled with guidance and instructions to ensure Pat would be supported long after he was gone. Paul is also survived by his daughter, Heather Young Luke, son-in-law, Navy Captain Brian Luke, three grandchildren, and his sister Emma Griffin. Paul’s memory and stories will continue to live on with dear friends, Butch (Judy) Haynes and Jerry (Rhonda) Maygarden, along with many more relatives and friends. Paul was a man of quiet faith who had a true servant’s heart. He was honorably discharged from the US Air Force as an E-4 in 1966. He began his career with BellSouth in 1967 as a Network Technician. Throughout his adult life, Paul served on a myriad of community organizations including the Pensacola Chamber of Commerce and the Pensacola Downtown Improvement Board. He was the Director of the Santa Rosa Educational Foundation and the Escambia County United Way. He was a member of the Panhandle Tiger Bay Club and the Pensacola Rotary Club. He was awarded the Paul Harris Award, the PACE award for community service, and the Sertoma Service to Mankind Award. He was an Elder at Trinity Presbyterian Church in Pensacola, Florida. On any Sunday where Pat was singing a solo part with the church choir, you would see Paul beaming in the congregation at his lovely bride. He retired from BellSouth after 35 years, serving as the Regional Manager for External Affairs in his final job with the company. Not ready to fully retire and looking for an opportunity to serve his community, Paul worked for the Baptist Healthcare Foundation for two years as the Director of Major and Planned Gifts. After four more years as Executive Director of the Community Foundation of Pensacola, Paul decided to fully retire in 2014. He lived in Pensacola, Florida until September 2020 when he and Pat began their next big adventure by moving to Annapolis, Maryland to be close to their daughter and her family. Although state COVID restrictions prevented some holiday traditions and travel plans, it was a blessing having the family together again. Paul was proud to be called Pappy by Austin Luke (Emelie Boucher), Carson Luke, and Madison Luke. At the age of 76, Paul began to teach himself American Sign Language so that he could better communicate with his beloved granddaughter. Before his death he had mastered the alphabet and many signs! He enjoyed telling all who would listen that his grandson, Austin, was starting law school in the Fall and that Emelie already had a full-time job as a registered nurse. He and Carson had a special relationship, because Carson shared his passion for organization and was the only grandchild who was a tall as him and could share his favorite shirts. The family wishes to thank the staff at the Anne Arundel Medical Center Oncology Unit and the Emergency Room staff. The compassionate care provided to Paul was a blessing. In lieu of flowers, those who wish to make a donation please consider the following charities that have special meaning to the family: 1) The Parents’ Place of Maryland (www.ppmd.org); 2) St. Elizabeth School (https://www.stelizabeth-school.org); or 3) Open Doors (https://www.valleyopendoors.org/contact-us). On February 22, 2021 there will be a private ceremony at the Maryland Veteran’s Cemetery in Crownsville, MD. The family will travel to Pensacola this summer to celebrate Paul’s life with his Florida family and friends.

Paul L. Young passed away on February 14, 2021 with his wife and daughter by his side. He was a devoted husband, loving father, and proud Pappy who always had a genuine smile, practical advice, a ready sense of humor. He will be greatly missed.... View Obituary & Service Information

The family of Paul Leonard Young created this Life Tributes page to make it easy to share your memories.

Send flowers to the Young family.