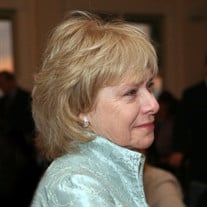 Nancy E. Meadows “Nan” (Age 71) Registered Architect and community volunteer passed away peacefully at her home on Friday, March 24, 2017 in Annapolis, Maryland after an extended battle with Kidney Cancer. Nan was born in 1945 at Detroit, Michigan. Nan was raised in Birmingham and Bloomfield Hills, Michigan where she did her first floor plan and doll house design at the age of seven. Nan and her mother loved visiting and exploring new home construction sites from an early age. At the age of five, she was rescued from a newly excavated basement by the local fire department, when she ventured too close to the edge. Nan attended grade school in Birmingham, MI, middle school at Detroit Country Day and high school at Bloomfield Hills. She graduated from Michigan State University with a degree in Sociology where she also met and married Lee Meadows. Nan lived in Istanbul, Turkey while her husband served there in the US Army. She also learned the local art of bargaining, which served her well in later life. Nan then worked as a county social worker while her husband attended graduate school at Cornell. And, she and her husband also lived in Belgium and France which afforded her the opportunity to pursue French Cooking while exploring Europe. The arrival of their son Scott and daughter Kelly during the couple’s eight years in Racine, Wisconsin generated a great joy in their lives as they nurtured their growing new family. Nan being full of energy pursued competitive tennis, sailboat racing, scuba diving, and started at of Wisconsin’s Graduate School of Architecture while living in and raising their family in Racine. In 1980 the family moved to Summit, NJ staying there for twenty years. Their “contemporary treehouse” in Summit was featured in several publications because of its contrast with neighboring colonial homes, and unique three story construction on steel beams over a small brook. As their family grew, Nan’s passion for architecture continued to grow too. She returned to architectural school (New Jersey Institute of Technology) when her youngest child, Kelly, entered second grade. She completed her Architectural degree in 1989 joining Goldstein & Associates architects in Maplewood, NJ. There she worked on Municipal buildings, libraries, and university buildings. Her husband remembers accompanying Nan to a Municipal building in a neighboring community to help retake outside measurements at 10:00 pm on a weekend night. The building housed city prisoners in addition to a court and municipal offices making the visit somewhat unusual, but no one asked what the couple was doing. Nan proceeded to work for firms in Manhattan, and in Morris County, NJ. The projects ranged from affordable housing apartments in New York, to large residences in Morris County, NJ. At the same time she served on the board of Habitat for Humanity in Morris County eventually serving as its president for two years. Nancy paired her social working background and passion for architecture to build the foundation of the Habitat chapter to thrive, and grow. Her chapter developed the largest support base of fortune 500 companies in the country, while building housing with those whose jobs didn’t make home ownership affordable. Nancy could be found in the boardroom negotiating with skills she learned in Turkish markets, as well as being the site lead on Saturday mornings, organizing the tradesmen and volunteers to deliver the homes that she had promised to the deserving families. In 2000 the Meadows were empty nesters and moved to Annapolis to pursue their love of sailing and the water. Nan joined the architect department at the Anne Arundel County Public Schools (one of the 50 largest school systems in the USA with 118 different schools). She designed renovations while supervising external architecture firms designing new schools for the county. Nan loved the challenge of creating user friendly spaces that were pleasing to the eye. Nan retired from the county board of education in 2011 to do extended cruising in the family’s sailboat. She also prepared for her new love, her first granddaughter. In retirement Nancy volunteered with the STAIRS after school tutoring program for 2nd graders from low income families, and the Peace and Justice Committee at 1st Presbyterian Church in Annapolis, where she was a member. Nan is survived by her Husband, Lee Meadows of Annapolis; son Scott Meadows and his wife Karen of New York, NY; daughter Kelly (Meadows) Allmon, husband Shannon Allmon, and grandchild Julia Allmon of Towson. She is also survived by sister Linda Irvin of Grand Junction, CO, her children:; Nephew Larry Irvin of Stow, MA and his wife Stephany with children Jordy, Megan, and Ryan; and Niece Lauri Connelly of Parker, CO, and children; Lindsie, Adriana and Clay. A Memorial is planned for Nan on April 22nd at 2:00 p.m. at 1st Presbyterian Church, 171 Duke of Gloucester Street, Annapolis, MD 21401. In lieu of flowers please send donations to STAIRS (http://stairannapolis.org/?page_id=130).

The family of Nancy Elizabeth Meadows created this Life Tributes page to make it easy to share your memories.

Send flowers to the Meadows family.