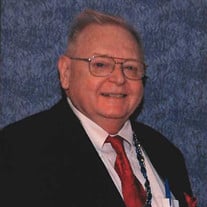 Michael Bruce McIntyre January 17, 1939 – April 30, 2020 Michael Bruce McIntyre – A man of great humor, was born at a young age in Buffalo, NY. He was licensed in 1952 as an amateur radio operator (K2AZB), currently licensed as KB3YA at the highest level of Amateur Extra. He graduated from HC Technical High School in 1956. He married the lovely Kathleen Manley on June 7, 1958. He worked his way through college as a musician and music teacher, graduating from Tri State College in 1961 as an electronics engineer with 3 children and one on the way. He is the father of 6 - Laura (Mark Ramsey), Linda Scott (Jerome), Mary Orange (Joseph), Melissa, Michelle Jones (William) and Michael; Grandfather of 14 - Ronald, Kathleen, Rachel, Leslie, Warren, Sean, John, Andrew, Eric, Jeffrey, Benjamin, Christopher, Amanda, and Heather; Great-grandfather of 7 - Aaron, Ethan, Haley, Owen, Harper, Lillian, and Mario and foster father to 28. He was employed by the federal government for 31 years, working for the Air Force, Navy, and Army. Early in his career he was the AF reliability engineer for the Gemini stage 2 guidance system. Later, he designed radio systems for the Navy in Charleston, SC. He moved on to station engineer at Keflavik, Iceland at the Naval Communications Station. He returned to the US to work at the Army Foreign Science and Technology Center in Washington DC using his expertise to evaluate foreign electronic equipment. He was well known for his briefings and made a documentary film for the US Army. He then worked at Fort Meade in the field office for the Army Assistant Chief of Staff for Intelligence, continuing his excellent reputation as a briefer. In 1981, he joined ECAC (now JSC) where he described his job as being paid by the Air Force to work on Army projects on a Navy base being guarded by the Marines and the Coast Guard. He retired from government service in 1994. In his spare time, he established and built the Bowie Crofton Roller Skating Rink (now Skate Zone) on Rt. 3, opening in 1974. He was a pilot and held 12 certificates from the FAA including single and multi-engine flight instructor certificates. In 1986, he became an adjunct instructor at AACC teaching aviation. He later also taught line dancing at senior centers and ballroom dancing on cruise ships. Upon retirement, in 1994, he established himself once again in the entertainment business as a musician and DJ. As owner of A Magic Music Machine, he lovingly played music for multiple generations, sometimes with the help of his grandchildren. He also loved playing the piano, cruising, dancing, gardening, and spending time with family. Michael was preceded in death by his mother Grace F Laemmerhirt, his father Bruce Byron McIntyre, his stepfather William Ede, and his brothers Ronald and Gerald McIntyre. A celebration of life will be held at a later date. In lieu of flowers, donations can be made to St. Jude’s Children’s hospital.

The family of Michael Bruce McIntyre created this Life Tributes page to make it easy to share your memories.

Send flowers to the McIntyre family.