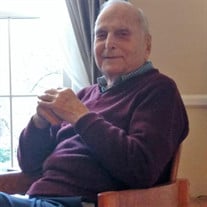 Max Shor died on January 29, 2022 in Bethesda, Maryland at Suburban Hospital after a brief illness, 6 days shy of his 101st birthday. Max was born on February 4, 1921 the third child of Fannie and Abraham Shor in New York City, “Maxi” to his friends and family. His brother Joel, sisters Rose Donaldson and Sue Ellenbogen predeceased him. His father owned a small grocery store and as a boy and young man he helped by doing deliveries. His early education was at a Yeshiva before he switched to the New York public school system. He attended City College before WWII and went to Washington, D. C. to work for the Bureau of Labor and Statistics while he continued his studies at night at George Washington University where he earned his Bachelor’s Degree. He was drafted into the Army and was stationed in San Francisco, as a Lieutenant working on maintaining the supply chain of war materials to the Pacific Theater. He married Burnette Saltzman in 1947 whom he met in Washington, D. C. They were first generation Americans, as all four of their parents emigrated from the Ukraine in the early 1900’s. They had three daughters, Diane Brill (Edward), Valerie Oppenheim(Jeffrey) and Debra Cole(Dale). Tragically, in 1963 Burnette died at age 40 of breast cancer. Max remarried in 1966 to Helen Ross (nee Goldfarb). Her son Howard also was part of the blended family. Helen died in 2007 when they were living in El Paso, Texas. After Helen’s passing, Max moved to Landsdale, Pennsylvania to be close to his family before moving to Rockville, Maryland in 2012. Max worked his entire career for the U.S Census Bureau as a statistician, rising to the level of Chief - Business Division. He was assigned to positions in Israel and Brazil under the auspices of the USAID assisting those countries to develop helpful business statistics to grow their economies. Max adored his daughters, 6 grandchildren; “GMax” to Joshua Brill (Katherine), Jessica Alef, Jay Oppenheim(Claire), Caryn Oppenheim, Amy Miller(Tony) and Joanne Cole (Gledis) and his 4 great grandchildren; Sebastian Alef, Zachary Brill, Tyler and Cassie Miller. He enjoyed travel, classical music, reading about history, debating politics and world affairs, watching football, making puns, laughing at his own jokes, and very hot black coffee. He will be missed by his family and all who had the pleasure of knowing him. Charitable donations in his memory can be made to https://www.musicforallseasons.org/donations/. Burial will be private at the Crownsville Veterans Cemetery in Crownsville, Maryland.

The family of Max Shor created this Life Tributes page to make it easy to share your memories.

Send flowers to the Shor family.