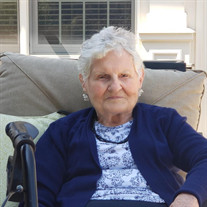 Mary “Colleen” Sole, of Millersville, Maryland, died on December 27, 2021, at the age of 95. She was surrounded by her loving family and caregivers. Colleen was born on April 22, 1926, in Washington, DC. She graduated from Anacostia High School in 1944 and began working at the Department of Commerce, Bureau of the Census. Colleen married Albert F. Sole (deceased) on November 9, 1946. She is survived by two daughters, Cheryl Garvey (John), Pam Besteman (Karst), four grandchildren, Shannon, Ryan (Tim), William (Johanna) and Jack (Jaime), six great grandchildren, Malea, Tyler, Caleb, Cooper, Dominic and Stella, and one great-great grandchild Chandler. Colleen is also survived by her brother, Thomas McCarty (Mary) of New Mexico and their children, Tom, Julie, Kathy, Joan and Margaret, as well as her nephew Stephen Sole (Arizona) and her dear friend Ramala Basu (Virginia). Colleen was predeceased by her parents, Elsie and Llewellyn McCarty, sister Janet Boley (Robert) of Arizona and husband Albert. Colleen was a devoted wife, mother, grandmother, sister, aunt and friend, and had a gentle and kind spirit throughout her life. The family asks that you send donations to Hospice of the Chesapeake.

The family of Mary Colleen Sole created this Life Tributes page to make it easy to share your memories.

Send flowers to the Sole family.