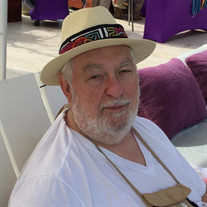 Martin William Decere Junior, formerly of Harrison, New York, only child of Martin William Decere Senior and Blanche Sysak Decere passed away on Sunday, January 17, 2021 in the arms of his loving wife of 55 years, Genevieve LaMedica Decere. Martin was born on February 10, 1939 in the Bronx, a borough of New York City. As a child, he attended Saint Adalbert’s Roman Catholic school and graduated from the Bedford Park Academy in 1956. Martin attended Long Island University in Brooklyn, New York receiving a Bachelor’s of Science in Chemistry in 1964. Upon graduation, Martin took a position in medical research at Columbia College of Physicians and Surgeons and the New York Blood Center. In 1969, Martin received his Masters of Management Science from Stevens Institute of Technology in Hoboken, New Jersey. He joined Cadbury Schweppes in 1973 as a financial analyst, transitioning later to assistant treasurer. In 1986, he joined Raymark, a division of Raybestos Manhattan, and as CFO helped take the company through a successful bankruptcy and reorganization. After years in the financial industry, he decided to pursue his love for science and teaching. He became a certified teacher of chemistry, bringing advanced placement chemistry into Lincoln High School in Yonkers, New York. Upon his retirement in 2006, Martin and Genevieve moved to Easton, Maryland. They joined the Benevolent and Protective Order of Elks, a charitable organization, and were very active in their parish church, Saints Peter and Paul Roman Catholic Church of Easton Maryland. Martin and Genevieve traveled extensively throughout their retirement. They fulfilled their dream of making a pilgrimage to the Holy Land led by Reverend Father James Nash in November 2018. In 2019, to celebrate Martin’s 80th birthday, the entire family took a trip to Italy, fulfilling his desire to show his children and grandchildren some of their early roots and where the journey all began. Martin’s greatest passion was his love and devotion to his wife, children and grandchildren who brought a smile to his face and made his heart sing. Martin is survived by his wife Genevieve, his two adoring daughters, Dr. Michelle Decere and Stacey Walker; sons-in-law, Dr. Ziad Batrouni and Pete Walker; grandchildren Lara, Gabby, Zoe, Hadley & Brooks. A Mass of Christian burial and celebration of his life will be held at a later date. In lieu of flowers, please consider a donation to Saints Peter and Paul Family Life Center in Easton, Maryland or Saint Vincent DePaul in Easton, Maryland.

The family of Martin William Decere Jr. created this Life Tributes page to make it easy to share your memories.