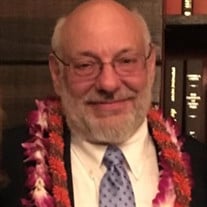 Mario Vincent DiStasio suddenly passed away on September 11, 2020 at the age of 65. Born in Brooklyn, New York, he was raised in the Catholic Church. As a youth, he served as an altar boy. He received both his bachelor’s and Master’s degrees from Fordham University. For most of his career, he was a government economist for the Department of Labor. He is survived by his loving wife, Christy, his parents (Vivian and Mario), daughters (Sabrina and Julieanne), sisters (Debbie and Patti), and numerous nieces and nephews. He met the first love of his life, Janet, while the two were in ski school. After a short courtship, they were married and had 24 wonderful years and two daughters together. Mario retired early to care for Janet prior to her death. He met the second love of his life after a mutual friend suggested he help Christy deal with a problematic roofing contractor. Christy & Mario were married after a brief courtship and enjoyed every minute of their shared love and joy of being retired together. Though born and raised a “city boy”, Mario loved the outdoors and the adventures associated with sailing, skiing, scuba diving, off-roading and camping. He professed to not be a fisherman, but he enjoyed being on the water in any capacity, even if it involved hooks, rods, and bait. Intensely passionate about whatever he tried, being outdoors both relaxed and invigorated him. In his later years, he joined The Church of Jesus Christ of Latter-day Saints, which he said changed his life. He faithfully served and touched many lives. He was dedicated and devoted to Church, including serving as Scout Master and a Sunday School teacher for both children and adults. Amidst the trials in his life, he expanded his capacity for love, learned charity, developed humility and increased in patience. He will be remembered as a loving, kind, dedicated husband, son, father, brother, uncle, and friend.

Mario Vincent DiStasio suddenly passed away on September 11, 2020 at the age of 65. Born in Brooklyn, New York, he was raised in the Catholic Church. As a youth, he served as an altar boy. He received both his bachelor&#8217;s and Master&#8217;s... View Obituary & Service Information

The family of Mario Vincent DiStasio created this Life Tributes page to make it easy to share your memories.

Send flowers to the DiStasio family.