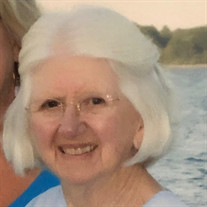 Born in Portsmouth, NH, in 1929 to the late Frederick and Pearl Winn Holland. Marilyn was predeceased by her husband Randolph M. Hale and sister Joyce Holland Browning. She is survived by her children Kimberly Hale Carney (Robert) and Clark Hale (Amy) and grandchildren Marilyn, Victoria and Haley Carney and William, Anthony, and Christopher Hale. Marilyn grew up in Portsmouth, New Hampshire. She graduated with a B.S. from the University of New Hampshire and worked in the field of microbiology and mycology for many years, including at Massachusetts General Hospital in Boston; University Hospital in Leiden, The Netherlands; American Type Culture Collection; and the Microbiology and Plant Pathology Laboratory, USDA, in Beltsville, Maryland. After they were married in 1961, Marilyn and her late husband Randy lived in Bethesda and then were early residents of Montgomery Village, where they raised their two children. During her retirement on the Eastern Shore of Maryland, she was an active volunteer and gardener and a member of the Queen Anne County and Talbot County Master Gardeners, fundraising committee of St. Martin’s Ministries in Ridgely, curriculum committee of the Institute of Adult Learning of Chesapeake College, and the Talbot County League of Women Voters. She was a member of St. Mark’s United Methodist Church in Easton, Maryland. Relatives and friends are invited to attend a celebration of her life at St. Martin’s in-the-Field Episcopal Church in Severna Park, Maryland, on January 18, 2020 at 10:30 am, with a luncheon in the parish hall following the service. The family asks that there be no flowers; persons wishing to make a charitable donation may donate to St. Martin’s Ministries of Ridgely, Maryland, or St. Martin’s in the Field Episcopal Church or School of Severna Park, or North Church of Portsmouth, New Hampshire.

Born in Portsmouth, NH, in 1929 to the late Frederick and Pearl Winn Holland. Marilyn was predeceased by her husband Randolph M. Hale and sister Joyce Holland Browning. She is survived by her children Kimberly Hale Carney (Robert) and Clark... View Obituary & Service Information

The family of Marilyn Holland Hale created this Life Tributes page to make it easy to share your memories.