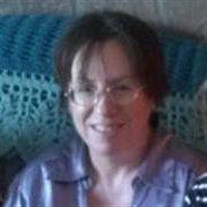 Marie Elaina Shepherd (Sestile), age 55, of Crofton, MD, passed away on Wednesday, February 20, 2019 in Annapolis, MD. Marie was born in McKeesport, PA, to John Michael Sestile and Mary Ann Andrejcak on February 10, 1964. She attended McKeesport High School and graduated in 1982. She earned an associate’s degree from the Community College of Allegheny County in 1985 and a bachelor’s degree from the Indiana University of Pennsylvania (IUP) in 1988. She was employed as a financial aid counselor at The Catholic University of America (CUA), 1989-2014, and was an AVON salve representative since 2007. Marie is survived by her husband, William (John), son William Jr., sister Angela Hitchcock, brother Johnny Sestile, father John Sestile, mother Mary Ann Andrejcak/Wintermyer/Graham, niece Amber Garcia, niece Leanna Koharchik, nephews Hayden Leamer, Steven and Ian Pearce, and great nephews Aiden Mayorga and Grayson Pearce. At Marie’s request her remains were cremated and a possible ceremony will be scheduled at a later date. In lieu of flowers the family would appreciate donations to Marie’s favorite charities, St. Jude Children’s Hospital, the Veterans of Foreign Wars, and the American Cancer Society. Marie loved AVON and very much appreciated the community of Catholic University for their love and support through the years. Online condolences may be made at www.LastingTributesFuneralCare.com

The family of Marie E. Shepherd created this Life Tributes page to make it easy to share your memories.

Send flowers to the Shepherd family.