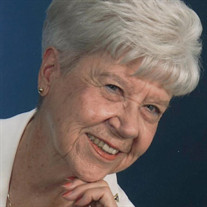 Margene Reeder passed away on July 9, 2020 at Hospice of the Chesapeake in Harwood, Maryland. Margene Ruth Vlieger was born on September 9, 1931 to Tom and Jennie (Ruisch) Vlieger in the family farm home near Sheldon, Iowa. Margene attended rural schools in Northwest Iowa, graduating from Newkirk Consolidated High School in 1949. In 1953, she received a Bachelor of Arts Degree (Cum Laude) from Central College, Pella, Iowa. In 1968, she received a Master’s Degree in Education in School Counseling from the University of Maryland. In 1978, she received a Certificate of Advanced Study in Special Education from Loyola College, Baltimore, Maryland. Margene was married to Ralph Charles Reeder on November 24, 1957 in Berkeley, California. They resided in the San Francisco Bay Area until 1960 when the couple moved to the Washington, D.C. area. They lived in the Maryland suburbs until 1990 when they moved to Annapolis in retirement. Margene’s working career was as an educator in the public schools in Iowa, California, and Maryland. She served as a teacher, counselor, and administrator. She retired in 1988 as Chief, Nonpublic Schools Branch Division of Special Education, Maryland State Department of Education. From 1988 – 1998, she worked as a consultant to the Maryland State Department of Education. In her retirement years, Margene enjoyed playing bridge, belonging to several duplicate groups, as well as several book clubs. She also enjoyed Women’s Groups and was past President of the Hillandale Women’s Club in Silver Spring and after moving to Annapolis, served as President of the New Annapolitans. She was a member of the Caritas Society and Friends of Annapolis Symphony. She and her husband enjoyed both the Annapolis and the Baltimore Symphonies. They also enjoyed Community Theatre and were subscribers to the Olney Theatre for more than thirty years. In Annapolis, they enjoyed the Colonial Players. Margene is survived by her two children, Charlie (Vanessa Curtis) and Jane (Chris Padgett) and four grandchildren, Kevin and Caroline Padgett and Jacob and Aaron Reeder, of whom she was very proud. She was preceded in death by her husband, Ralph, her parents and four siblings. She is also survived by 11 nieces and nephews. Margene was a member of the Presbyterian Church, USA. She was currently a member of the First Presbyterian Church of Annapolis. Prior to moving to Annapolis, she was an active member of the New York Avenue Presbyterian Church, Washington, D.C., where she was ordained as a deacon and elder and served on various boards and committees. She also served on the Pastoral Care Committee of the National Capital Presbytery. In lieu of flowers, contributions in her memory may be made to the First Presbyterian Church of Annapolis, 171 Duke of Gloucester Street, Annapolis, MD 21401; New York Avenue Presbyterian Church, 1313 New York Avenue, NW, Washington, D.C. 20005; or Hospice of the Chesapeake, 90 Ritchie Highway, Pasadena, MD 21122 (please note Margene’s name in the memo line). A virtual memorial service is being held on Thursday, July 30 at 1:30 pm via live video link from the First Presbyterian Church of Annapolis. Please go to the church’s home page https://www.annapolis-presbyterian.com/ to access the link to connect to the service. The link should be available approximately two days prior to the event. Instructions on how to access the memorial will be updated. Interment will be private at the Maryland Veterans Cemetery in Crownsville, Maryland.

Margene Reeder passed away on July 9, 2020 at Hospice of the Chesapeake in Harwood, Maryland. Margene Ruth Vlieger was born on September 9, 1931 to Tom and Jennie (Ruisch) Vlieger in the family farm home near Sheldon, Iowa. Margene attended... View Obituary & Service Information

The family of Margene V. Reeder created this Life Tributes page to make it easy to share your memories.