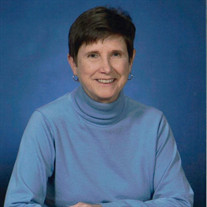 Margaret Kay Harris (Katie), 74, passed away peacefully at AAMC hospital with her wife at her bedside on the morning of December 2, 2020 after a long battle with blood cancer. Katie was born on April 18, 1946 in Charlotte, NC to parents Charles and Nora Harris. She is survived by her loving wife of 28 years, Sylvia Lohr. She was predeceased by her oldest sister, Linda Pegram (Jim) of Georgia. She is also survived by her sister, Alice Smith (Robert) of The Woodlands, TX; her two nieces, Melissa Kay (Lance) and Carrie (Garett) in Texas, niece Meredith (Michael) and only nephew Kris (Kourtney) of Georgia; two nieces-in-law, Deitra (Melanie) and Melissa (Trent) of Virginia and their father, Katie’s brother-in-law Richard Larrick (Lisa) of Annapolis, MD; and niece in name only Nameeta of Virginia. Katie is also survived by her Godson, Brooks Joseph Dana Evans, five years old, in which she was so proud to be his Godmother. Katie’s early education took place in Charlotte, NC. She then attended Lenoir Rhyne College in NC graduating in 1968. She went on to obtain her master’s degree from Wake Forest University in 1975. She then moved to Atlanta, GA and made many contributions in the women’s rights movement. She was an active member of the National Organization of Women (NOW). She was president of Atlanta NOW and eventually president of Georgia NOW. In these roles she led the organization’s effort to persuade the GA legislature to pass the equal rights amendment and lobbied the legislature for additional benefits for women. She was able to sway opinions of hostile suspicions of audience against feminism. She then traveled to many states to rally the support for the equal rights amendment to be passed by the states. She briefly worked for the Georgia Civil Rights Commission. Upon moving to the DC area in the 80’s she began her career in the Federal Government working for the General Accounting Office. She remained there until her retirement in 2006 after 30 years of service. Katie moved to Annapolis in 1993 with her then partner, Sylvia. The two began going to the very loving parish of St. Anne’s Episcopal Church in Annapolis. She became an active member of St. Anne’s outreach for the after-school tutoring program at the Stanton Center Community Hall. She tutored for over 15 years until her illness. She was also an active member of the Clay Street Christmas Project, an outreach of St. Anne’s Church. She took over that project in approximately 2008 until the needs changed for the area’s children. She then redesigned the project, and it became the Winter Gear for the Annapolis Elementary School children. She headed up this project until her illness in 2018. Sylvia and Katie were married in 2013 in the Annapolis Courthouse. After their marriage, a ceremony of blessings of their marriage was held at St. Anne’s Episcopal Church. This will be remembered as a seminal moment in the church’s history. Katie will be missed by all who knew her. In lieu of flowers, donations may be made to St. Anne’s Episcopal Church, 199 Duke of Gloucester St, Annapolis, MD 21401 in remarks: Katie Harris/Rainbow Group. Due to COVID-19, the funeral for Katie will be held at a later time.

Margaret Kay Harris (Katie), 74, passed away peacefully at AAMC hospital with her wife at her bedside on the morning of December 2, 2020 after a long battle with blood cancer. Katie was born on April 18, 1946 in Charlotte, NC to parents Charles... View Obituary & Service Information

The family of Margaret "Katie" Harris created this Life Tributes page to make it easy to share your memories.

Send flowers to the Harris family.