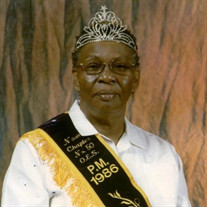 Lucille Inez Perry - Brooklyn, NY, passed away peacefully at the age of 81 on January 14, 2022. Born May 4, 1940, in Union Springs, AL to Evergreen Watkins-Taylor, she was fourth of seven children: Robert, Martel, Calloway, Jenkins Jr., Elmer, and Douglas. Lucille moved to Westbury, NY in 1959 to work as an Au Pair. In 1961 she moved to Brooklyn, NY where she worked in private industry and began to raise a family, welcoming Leonard and Michael to the world. Later, she briefly returned to Alabama to take care of her mother who fell ill and supported her three brothers while they remained in the home. Lucille returned to New York and resumed managerial work. By 1964, Douglas and Brian Taylor were born, as she welcomed Wilbur, a kind and respectful classmate of Michael’s to the family. In 1972 she was employed by the Medical Society of Kings County, NY, and retired 28 years later as an Executive Administrator, responsible for providing Kings County residents information regarding the practice of medicine and the public health. Lucille founded the Evergreen Progressive Chapter #55, Order of the Eastern Star, naming it after her mother. In August 1974, she married Kenneth Perry from Sacramento, California. They were married for 24 years before Kenneth’s passing in November 1998. She accepted a position as a resident counsellor for Heritage Health and Housing in New York City from 2002 to 2006. Several years later, Lucille fell ill and transitioned to Crofton, MD., where her youngest son, Brian became her primary caregiver. Lucille and her son Brian became parishioners at the Winning Souls Evangelistic Church under the spiritual leadership of Reverend Dr. Ian Edwards. Beloved wife of the late Kenneth Perry, Survived by children Brian Taylor, Douglas Taylor, Michael Taylor, 14 grandchildren and 6 great grandchildren. Preceded in death by her brothers Elmer, Douglas, Jenkins Jr. and sons Leonard and Wilbur. Lucille will be remembered for her sense of humor, cooking and unwavering faith. A private service will be arranged on January 29, 2022, at 11:00 a.m.

The family of Lucille Inez Perry created this Life Tributes page to make it easy to share your memories.

Send flowers to the Perry family.