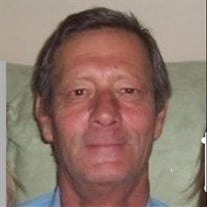 Lloyd Wesley (Wes) Barr, 67, passed away on Friday, March 27th, 2020 after a brave battle against esophageal cancer. He was surrounded by his loving daughters in his final days. Wes was born on October 3, 1952 in Baltimore, MD to Lloyd R. Barr and Evelyn Barr. He grew up in Essex, MD where he participated in sports and fishing activities through his youth. He graduated from Kenwood Senior High School in 1970. He then graduated from Essex Community College in 1972 with an Associates Degree. From 1972 to 1975, he attended the University of Maryland, Johns Hopkins Hospital hematology laboratories. He began his career with Anne Arundel County Wastewater Management in 1975. He retired in 2003. Wes loved to spend his time fishing and was an avid coin collector. He enjoyed cooking and spending time with his loved ones. In 2011, he decided to leave the colder Maryland weather and moved to Zephyrhills, FL until the last 2 weeks of his life, when he moved back to Maryland to spend his last days with his 5 daughters. Wes has rejoined his parents, Lloyd Russell Barr and Evelyn Katherine Barr. He is survived by his brother, Russell Lee Barr (Jeanne) of Zephyrhills, FL. He is also survived by his first wife, Linda Howison Barr, his 5 daughters, Julie Wentzel (Erik), Pamela Bergendahl (Eric), Kimberly Barr, Nicole Lazor (Steve) and Caitlyn Van Der Geest (John) and his second wife, Patricia Rossback Barr and her two children, Paul Gibbs and Kathy Gibbs. Wes also had 10 grandchildren, Alexandra, Delaney, Adeline, Ian, Aiden, Jaxson, Emerson, Luke, Amelia and Ava. Due to the current quarantine, the family held a private viewing and will plan a Celebration of Life for Wes at a later date. In lieu of flowers, please donate to Fish for a Cure, AAMC Foundation for the Cancer Institute at Anne Arundel Medical Center. Checks may be sent directly to AAMC Foundation, Fish for a Cure, 2000 Medical Parkway, Belcher Pavilion Suite 604, Annapolis, MD 21401.

Lloyd Wesley (Wes) Barr, 67, passed away on Friday, March 27th, 2020 after a brave battle against esophageal cancer. He was surrounded by his loving daughters in his final days. Wes was born on October 3, 1952 in Baltimore, MD to Lloyd R.... View Obituary & Service Information

The family of Lloyd Wesley Barr created this Life Tributes page to make it easy to share your memories.

Send flowers to the Barr family.