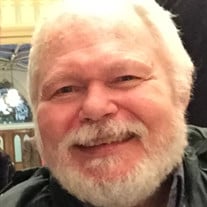 Lawton Richard Metcalfe Jr., 73, of Arnold, MD, passed away on May 13, 2022, surrounded by his family at home after complications from a stroke suffered 14 years ago. Richard was born on September 25, 1948, to Lawton Richard Metcalfe and Jane Metcalfe in Elizabethtown, NY. After Richard graduated from high school in 1966, he went on to study at the Friars of the Atonement for three years, which lead him to Washington D.C., where he studied and graduated from The Catholic University of America; Richard majored in music education and earned a Master’s in the pipe organ. After college, Richard continued to touch and influence many people’s lives as a cherished music teacher at Parochial, Prince George’s and Anne Arundel County Public Schools. Outside of Richard’s gifted teaching abilities in the classroom, he was also instrumental in bringing children together to participate in major musical productions such as the Wizard of Oz, The Sound of Music, The Music Man, and many more. Richard was a devout Catholic and a keen, skilled musician. He enjoyed playing the organ for over 50 years throughout his community including at St. Augustine’s and St. Martin’s. Richard continued playing the organ up until suffering a stroke in 2008. Richard was a devoted husband, father, brother, and uncle. In 1987, Richard and Priscilla were married at St. Augustine’s in Washington D.C. and went on to share their home with their 4 sons: Lawton Richard Metcalfe III, Christopher Metcalfe, Timothy Aminzadeh, and Michael Aminzadeh. Richard was predeceased by his parents Lawton Richard Metcalfe and Jane Metcalfe and brother, James Wells Metcalfe. He is survived by his wife Priscilla Metcalfe (Bowen) (Arnold, MD), his first wife Lydia Sugihara, his sons, Lawton Richard Metcalfe III, Christopher Metcalfe, Timothy Aminzadeh, Michael Aminzadeh, his grandchildren, Julia Aminzadeh, Harper Metcalfe, and Chase Metcalfe, his siblings, John Metcalfe (Jenny Metcalfe) and Sarah Metcalfe Findlay (Lawrence Findlay), and nephew and niece, Matthew, and Katharine Findlay. A Memorial Mass will be held on Saturday, June 18, 2022, at 12:00 PM at St. Martin’s Catholic Church (1908 North Capital St., Northwest Washington D.C).

The family of Lawton Richard Metcalfe created this Life Tributes page to make it easy to share your memories.

Send flowers to the Metcalfe family.