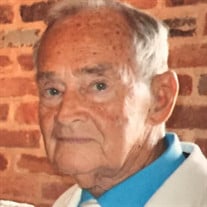 Lawrence (Larry) Laser joined his awesome Savior on 13 April 2020. Born in D.C. on 2 May, 1933, Larry was raised in Kenilworth, Md. He graduated from Bladensburg High School in 1951, meeting his future bride, Phyllis Honour, there in 1949. Phyllis and Larry were married in the University of Maryland Chapel at the end of their junior year (June 1954). Upon graduation, Larry taught Spanish at the University. Phyllis joined the CIA Office of Security and Larry soon followed, joining the Latin American Division of CIA. Fifty years (about evenly divided as staff and contract) of exciting and rewarding work followed, including ten in Brazil, four in Miami, and extensive international travel. Larry’s positions included Chief of Base, Chief of Station, Chief of Operations for Latin America, and Chief of Counter Narcotics, with world-wide responsibilities. Larry and Phyllis developed an immediate love for Brazil and her people. When Chief of Base in Belo Horizonte, the City Council voted him an honorary citizen. Blessed with a marriage to an all-star CIA wife, Phyllis quickly learned Portuguese, supporting Larry in three successful careers, the other two being Director of International Affairs for a major energy company and President of a business security/intelligence firm. She was always there for Larry and three wonderful children, Debra, Kevin, and Lawrence Michael, all living nearby. Oh, how God is good!! He provided Phyllis and Larry with seven grandchildren and seven great grandchildren. The best 30 years of the couple’s life began when Jesus answered their call for an intimate relationship. Larry and Phyllis then became active in the Bay Area Community Church, where they served as ushers/greeters for many years. Larry’s interests were many and varied, including ballroom and country line dancing, sports, and landscaping. He and Phyllis were volunteer DJ’s (country line dancing) for many years, playing at senior centers, nursing homes, the Moose, and other spots.

Lawrence (Larry) Laser joined his awesome Savior on 13 April 2020. Born in D.C. on 2 May, 1933, Larry was raised in Kenilworth, Md. He graduated from Bladensburg High School in 1951, meeting his future bride, Phyllis Honour, there in 1949.... View Obituary & Service Information

The family of Lawrence Clement Laser created this Life Tributes page to make it easy to share your memories.

Send flowers to the Laser family.