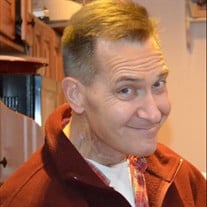 Larry was born in Jamaica, New York and moved to Bowie, Maryland and eventually settled in Annapolis, Maryland. He was born in 1959 to George and Lynne Brosan and has two siblings, brother Terrence and sister. He was married for 31 years to his wife, Lisette, and they have two wonderful children: 22 year old son, Connor and 17 year old daughter, Devyn. His nieces and nephews were a huge part of his life as well! Larry was an inspiration and role model to the children in his family and the neighborhood children. Due to his seven battles with cancer, he was able to be a stay at home Dad, which allowed him to attend his children and family members sporting events and celebrations. He found joy in watching his daughter, Devyn, play softball and ride horses. As Larry was unable to speak the last several years of his life, he texted his nephews and nieces on a regular basis. They would talk about sports, current events, news, nature, and various other topics. He had a lifelong love for the Baltimore Orioles and often discussed stats and games with his nephews. He loved the Washington Redskins too, but could not discuss with the nephews because they are fans of the OTHER local team, the Baltimore Ravens. Larry loved all cats and dogs, especially his rescue lab, Buster. A frequent joke in the neighborhood was counting how many times a day he walked the dog. He loved traveling to Lake Tahoe as well as San Francisco, with Tahoe being his ultimate favorite place on earth. He taught children to slow down and enjoy the wonders around them. He introduced his wife to the Shenandoah Mountains which became a favorite for their family to hike. He loved spotting the bears! He also loved the movies – All Things Movies! He was enthralled with the production, screenplay, direction, composing, cinematography, actors, everything. He loved watching movies, analyzing and critiquing them with his son, Connor. His favorite movie to watch with his wife was The Quiet Man, but Jaws was his most favorite to watch with the entire family. He was an old soul and should have been born 20 years prior. He had many, many friends in the neighborhood and community. He had a way of non-verbally speaking with everyone, fist bumps were a favorite! He was so grateful to all of the doctors, nurses, and staff at Anne Arundel Medical Center and Johns Hopkins Hospital and most knew him by name and often gave him high-fives or standing ovations as he completed another round of chemo or radiation. They were astonished by his fight and will to live for so many years. He was an inspiration to many. Larry was most inspired by the hospital employees. He specifically bonded with the doctors and nurses at the offices of Dr. Robert Meek III at Anne Arundel ENT; Dr. Angel Torano, Annapolis Radiology Associates; and Dr. Peter Graze, Maryland Oncology and Hematology. He was forever grateful for the countless surgeries and support from Johns Hopkins surgeons, Dr. Carole Fakhry and Dr. Jeremy Richmon. He would also like to give a huge shout out to the nurses on the oncology 4th floor at Anne Arundel Medical Center, who were so encouraging, patient and absolutely AMAZING! He lived a beautiful life. He never gave up, even with 12 years of a horrible disease. He never once asked, “Why me?”. He accepted what God had planned for him and created a wonderful legacy for all of those he touched. A Green Burial service will be held outside on Saturday, February 20th at 1PM at 814 Bestgate Road Annapolis. Due to the green service, we ask that no flowers be sent. In lieu of flowers, he asked that you please contribute to his children’s education fund by donating to: http://www.gf.me/u/zjnrxy.

Larry was born in Jamaica, New York and moved to Bowie, Maryland and eventually settled in Annapolis, Maryland. He was born in 1959 to George and Lynne Brosan and has two siblings, brother Terrence and sister. He was married for 31 years to... View Obituary & Service Information

The family of Lawrence John Brosan created this Life Tributes page to make it easy to share your memories.

Larry was born in Jamaica, New York and moved to Bowie, Maryland...