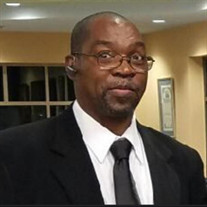 Larry Francis Whittington, Sr. was born on August 9, 1958 to the late Frederick and Frances Whittington in Anne Arundel County. He was called home to glory on January 11, 2021. Larry (“Ace”) as he was fondly called. He was a husband of 23 years to Sheila Harrison Whittington. A father of seven, grandfather of twelve. He was a hard worker as Lead Custodian, where he retired from Annapolis High School after 32 years. He was a gentle, humble and generous man that would give you his last, if needed. No matter where he went he always ran into someone he knew. Ace enjoyed life. His love for cars kept him under the hood from sun up to sun down. He loved going to the race track, car shows and baseball games. He especially loved spending time with his family and at times he was a big kid chasing his children through the house and play fighting with them. He wasn’t big on TV, but when he did watch it, it would be lifetime movies with his wife, but she couldn’t enjoy the movie because he was busy hollering at the TV, like they could hear him. When he decided to cook, it was fried potatoes with onions. He swore he was the best at it. If you told him his fried potatoes were good you wouldn’t hear the end of it. He loved eating lemons with salt, grapes, salad and tomatoes. Larry was preceded in death by his parents, Frederick and Frances Whittington; sister, Vivian Whittington; mother-in-law, Ellean Harrison; granddaughter, Deyjah Whittington; 4 brothers-in-law, one sister-in-law. Larry is survived by his wife, Sheila Whittington; sister, Yvette Hall, two brothers, Harry and William Whittington; one godsister, Cindy (Orlando) Whittington; seven children, Latoya (Terrence) Conner, Larry, Jr., Chkeada (Gordon), Deon and Lakesha Whittington; two stepchildren, Demond Butler and Tashea Wilson; twelve grandchildren, one brother-in-law, Phillip Harrison, seven sisters-in-law, Joanne, Tessa (Gerald), Vivian, Wyseola, Jolyn and Sharon Harrison, Phyllis Whittington and a host of nieces, nephews, relatives and friends. OUR BROTHER Today is full of precious memories of our brother, Larry. Every single memory is filled with happiness and will be treasured in our hearts forever. There was so much pain when it was time to let him go, but we know that God had a better plan for him. We’ll love you forever, William (Phyllis), Harry and Yvette

Larry Francis Whittington, Sr. was born on August 9, 1958 to the late Frederick and Frances Whittington in Anne Arundel County. He was called home to glory on January 11, 2021. Larry (&#8220;Ace&#8221;) as he was fondly called. He was a husband... View Obituary & Service Information

The family of Larry Francis Whittington Sr. created this Life Tributes page to make it easy to share your memories.

Send flowers to the Whittington family.