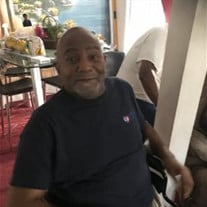 Larry Hodges, son of Catherine Hodges, and the late Elisha Lee Hodges was born on July 9, 1953 in Washington, D.C. He departed this life on March 30, 2020 at the Veterans Hospital in Baltimore, MD after a prolonged illness. He received his formal education in the Anne Arundel County School System. He graduated from Arundel Senior High School in 1971. Larry served his country as a U.S. Army soldier from 1971 to 1975. He was an Honor Guard, and a member of the Foreign Wars. Larry received many military awards to include a Certificate of Nomination, National Defense Service Medal, Sharpshooter Badge, Marksman Badge, and an Armed Forces Expeditionary Medal. Larry was previously employed with EES Stanley Trucking, Williams Brother Paving, and Reliable Contractors in Millersville, MD. Larry accepted Christ as his Savior at an early age and was a member of Wilson Memorial United Methodist Church. Larry loved sports. He played baseball with the Meade Village Cobra’s baseball team and flag football with the Dorsey-Hanover football team. Larry played on several basketball teams in Maryland and Virginia where he shined athletically as a professional prospect in his younger years. Larry was an avid jokester with a heart of gold. He always had a story to make you laugh. He loved baking, fishing, basketball, baseball, and watching football, especially the Baltimore Ravens and the Orioles. More importantly, he loved his family functions and spending time with the grandkids whom they affectionately called “Grandpop and Pop.” Larry was preceded in death by his father, Elisha Lee Hodges, and his sister Jeanette Lee Hodges. Larry’s life and legacy will be remembered by his mother, Catherine Hodges, his devoted fiancé, Diane Plater, daughter, Jonese Downs (Charles); stepdaughter, Londa McCain (Donald), stepson, Corey Sanders (Renee); two children he raised as his own Natasha Johnson and Rayshawne Mackall; twelve grandchildren; four siblings; Charlene Holland (Robert), Bessie Boyd, Linda Hodges, and Dale Hodges; three Aunts, Rosie Shorter, Nancy Wren (Tyrone), and Rosalee Joyner (Emmanuel); Godmother, Nancy Wren; Godbrother, Roderick Wren; three Godchildren, Shawnteara Mackall, Zimir Johnson, and Xyrus Johnson; four devoted friends, Charles Thomas, Thomas Ballard, Samuel Joyce, and Kerway Coates. He also leaves behind to cherish his memories many nieces, nephews, and a host of other relatives and friends. Viewing will be held on Thursday, April 9, 2020 from 10 am until 12 pm at Lasting Tributes Cremation & Funeral Care. Due to COVID-19 and the limitations we're experiencing for funeral services, we ask that all attendees wait in their vehicles until notified they can safely enter our facility. Staff will be attending the parking lot to insure a smooth flow of traffic. Attendance at Larry's funeral service will be limited to only family members. We will be streaming the funeral service on our website. Please tune on on Thursday, April 9, 2020 at 12:00 pm. Burial will follow at Crownsville Veterans' Cemetery for family only.

Larry Hodges, son of Catherine Hodges, and the late Elisha Lee Hodges was born on July 9, 1953 in Washington, D.C. He departed this life on March 30, 2020 at the Veterans Hospital in Baltimore, MD after a prolonged illness. He received his... View Obituary & Service Information

The family of Larry Hodges created this Life Tributes page to make it easy to share your memories.

Send flowers to the Hodges family.