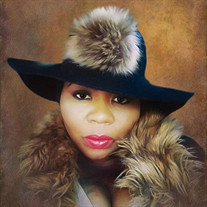 Keonya Katriea Brown peacefully transitioned into her eternal life with God after a yearlong illness with pancreatic cancer on December 24, 2020 in the comfort of home in Glen Burnie, Maryland, surrounded by her loving family. Preceding her... View Obituary & Service Information

The family of Keonya Katriea Brown created this Life Tributes page to make it easy to share your memories.