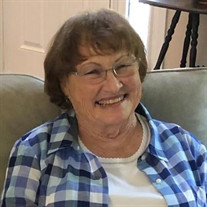 With great sorrow, her family shares the news that Kathryn “Kippy” Ross passed away unexpectedly on Tuesday June 30, 2021. She is proceeded in death by her first husband, Jack Amick, and survived by her husband retired U.S. Navy Captain Thomas H. Ross, her four children: Debbie Hargrove, Ilene Wendland, Kathy Sharkey, and John Amick, and many beloved family members and friends. Kippy was born in Oklahoma and moved to Maryland with her parents in the early 1950’s where she met Jack Amick. She earned her bachelor's degree from Towson Teacher’s College in Baltimore. She began a teaching career, married Jack, and they started a family. The Amicks established a loving and happy home in Silver Spring, Maryland. Kippy’s favorite hobbies included gardening, sewing, cooking, and cruising the Chesapeake Bay. The Amick family savored the bay including memorable family cruises from Cape May, NJ to St. Mary’s City Maryland. Ashore, Kippy’s hillside strawberry and vegetable patch won prizes and provided a bounty for homemade jams, ice cream, strawberry shortcake, and endless fresh vegetables. Kippy’s sewing prowess was the stuff of legend: she could expertly reupholster furniture, make boat and car curtains, and create a wide variety of clothing items, including a daughter’s wedding dress. In 1983, Jack and Kippy relocated to the community of Ulmstead, on the Magothy River near Annapolis. A short time later she welcomed Jack’s parents into their home. During this time, Kippy cared for Jack during his battle with cancer. Following his death, she continued to care for his parents until their passing in the mid 1990’s. At the same time, Kippy proudly supported her youngest child’s journey into SEAL Team. Kippy spent many years active at Evangelical Presbyterian Church of Annapolis alongside widower Thomas Ross and a relationship began. Kippy again found happiness with Tom and started a new chapter in life with the Ross family. Tom and Kippy’s family includes: Judge Thomas G (Suzanne), Douglas, Debbie & (Tim), , Ilene, (Rick), Jim (Lynn), Kathy (Jim), and John (Gina). Tom and Kippy enjoyed traveling Europe, Canada, and across the United States. When not traveling Kippy and Tom, President of Class 1950, could be spotted at a Navy Football, Basketball, and Lacrosse games. After tailgating with Tom’s Naval Academy Classmates, you might find them cheering in the stadium or back at their warm and comfortable home. Kippy will be missed immensely by her friends, her church, and mostly by her loving family. All friends and family are invited to Lasting Tributes 814 Bestgate Road, Annapolis July 8th between 2pm & 4pm and 6pm & 8pm to remember her life. Memorial Services will be held at Evangelical Presbyterian Church of Annapolis 10AM July 9th, followed by a Crownsville Veteran Cemetery burial. Donations in Kippy’s name can be made to the American Cancer Society and Word of Honor Fund.

With great sorrow, her family shares the news that Kathryn &#8220;Kippy&#8221; Ross passed away unexpectedly on Tuesday June 30, 2021. She is proceeded in death by her first husband, Jack Amick, and survived by her husband retired U.S. Navy... View Obituary & Service Information

The family of Kathryn "Kippy" Ross created this Life Tributes page to make it easy to share your memories.

With great sorrow, her family shares the news that Kathryn “Kippy”...

Send flowers to the Ross family.